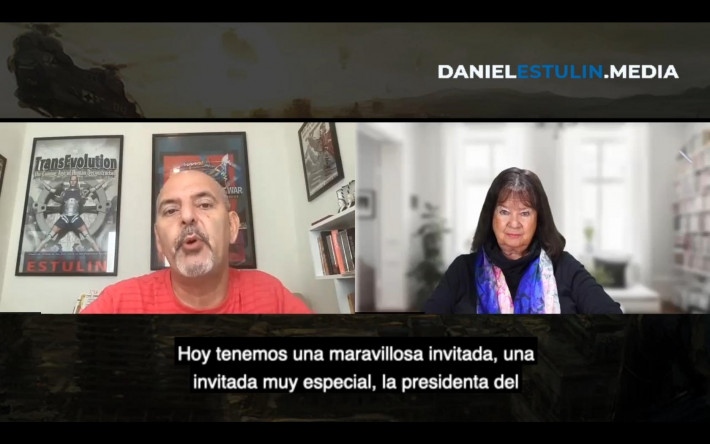 May 4 (EIRNS) – In the course of a wide-ranging interview with author and publicist Daniel Estulin , Schiller Institute founder Helga Zepp-LaRouche today responded to a question about the subject of the Schiller Institute’s upcoming May 7 international dialogue on “The Role of Youth in Creating a New International Economic Architecture.”

“Essentially it will be a continuation of the last one [on April 9, “For a Conference to Establish a New Security and Development Architecture for All Nations”], because what we have initiated is the idea that you have to have an international security architecture which includes the interest of every single nation. Which is why in the last conference we had speakers from Russia, the United States, Europe, India, South Africa, Latin America. It’s the idea that if we, as humanity, cannot come together and decide on principles which guarantee the survival of all of us, then we are no better than some wild animals – although even wild animals are not as mean as the way some people sometimes behave. So, this was a very productive conference.

“So, what the next conference is addressing, mainly, is young people. Because if you put yourself in the shoes of a young person, let’s say in Germany, France, Italy, the United States, etc., the future is not looking very bright. You’re looking at World War III, you’re looking at a collapsing economy, a collapsing financial system, world starvation, a pandemic which is not yet under control.

“This conference intends to form a partnership of young people from all over the world to fight for a better future, because the future belongs to the young people. They are not being asked right now: Is it really their interest that the world should go up in a thermonuclear mushroom cloud, followed by a nuclear winter? Young people should have a say in what their future is.

“There are such exciting developments taking place! For example, we are on the verge of getting thermonuclear fusion power. That is incredible, because once we have commercial thermonuclear fusion, we have energy security and raw material security on the planet. Also, space travel will be much enhanced, because you have a new fuel source for space travel. Then there’s the whole idea of cooperation in space: build moon villages, and eventually build a city on Mars.

“All of these are things which excite young people. That is where humanity can go, provided we get out of this present crisis. So that is what this conference will address, and I think we will have many young people there from all five continents.”