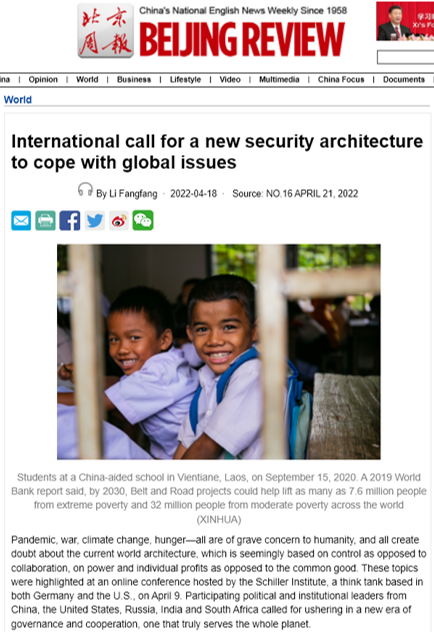 April 24 (EIRNS)–The national, English-language news weekly in China, the Beijing Review, gave prominent coverage to the Schiller Institute conference of April 9, titled, International call for a new security architecture to cope with global issues. The article was datelined April 18, and has appeared in print as well as online.

It noted that, “Despite differences on particular issues, all speakers concurred that only an international security and development architecture totally different from the existing one can make the necessary process tangible.”

It included Helga Zepp-LaRouche’s observation that, “The proposal of China for an alignment of the Belt and Road Initiative, the American Build Back Better World program and the EU’s Global Gateway program can become the actual development underpinning global security architecture. Ukraine, rather than being the cannon fodder in a geopolitical confrontation, can be the bridge between Europe and Eurasian nations.

“Even a multipolar world still implies the danger of geopolitical confrontation. We need a dramatic, sudden change in the way we organize our affairs. It has to start with an honest, explicit insight that a continuation of the present policies risks conflict, in which there would be no winner,” she concluded. The full article can be read here.