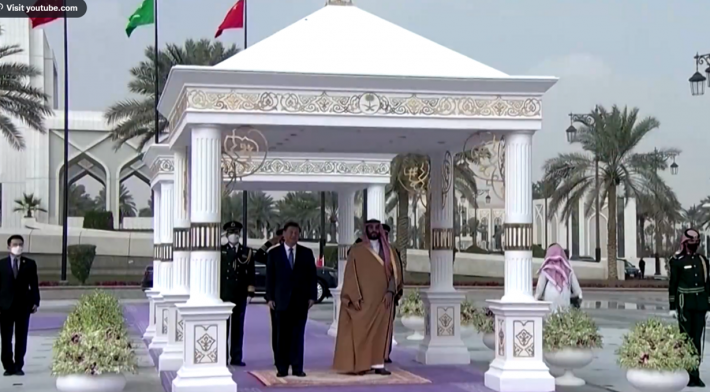 Xi was received with much pomp, his plane escorted into the King Khalid airport in Riyadh by six jets of the Saudi Royal Air Force, greeted warmly by Prince Faisal bin Bandar Abdullaziz, Governor of the Riyadh region, and by Foreign Minister Prince Faisal bin Farhan bin Abdullah. The warmth with which he was greeted and lavish ceremonies that will be part of his visit stand in stark contrast to last July’s visit by U.S. President Joe Biden, who met Crown Prince Mohammad bin Salman with a fist bump and later snarled, without success, that Saudi Arabia should increase oil production and improve its human rights record.

Robert Jordan, a former U.S. ambassador to Saudi Arabia and diplomat in residence at Southern Methodist University, described the U.S.-Saudi relationship as a “slow-moving train wreck and we shouldn’t be surprised to see consequences of that.”

In contrast, speaking at today’s Foreign Ministry briefing, spokeswoman Mao Ning described Xi’s visit as “the largest and highest-level diplomatic event between China and the Arab World” since the founding of the People’s Republic of China. “It will be an epoch-making milestone in the history of Arab-China relations.”

Holding the summit, she said, was “a joint strategic decision to strengthen coordination and solidarity under the current circumstances….We hope to jointly act on the Global Development Initiative and the Global Security Initiative, advance on high-quality Belt and Road cooperation and contribute to the peace and development of the Middle East and the world at large.”

Ms. Mao Ning had similar remarks on the upcoming China-GCC summit and on talks with the Saudi leadership. China and Saudi Arabia have a shared focus on development strategies, she said. Xi will have in-depth discussions with King Salman bin Abdullaziz al Saud and Crown Prince and Prime Minister Mohammad bin Salman and elevate the current strategic partnership to a higher level. [China Foreign Ministry announces import of the visit: https://www.fmprc.gov.cn/mfa_eng/xwfw_665399/s2510_665401/202212/t20221207_10986586.html ]