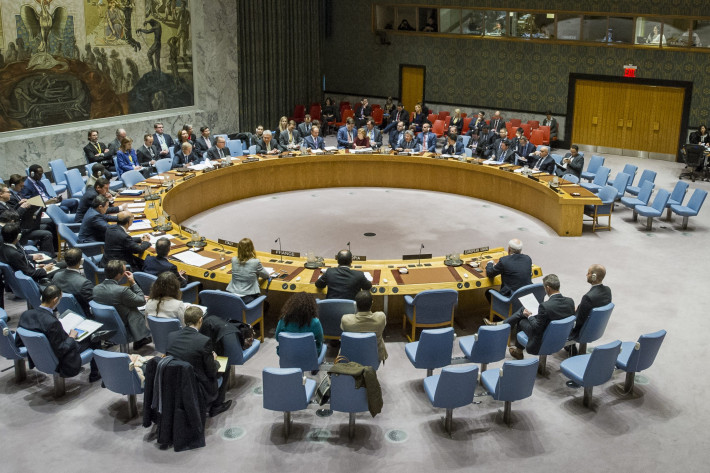 Feb. 8, 2022 (EIRNS)—Being chair this month of the UN Security Council, the Russian Federation organized an Open Debate on Monday on “General Issues Relating to Sanctions: Preventing their Humanitarian and Unintended Consequences.” Two UN officials and representatives from 19 nations spoke, most warning of how the use of sanctions has run amuck, becoming the preferred choice instead of the original concept of a measure of last resort, often with disastrous consequences for the right to food, water, shelter, and health of peoples caught in the crossfire of sanctions. Several African representatives noted that eight of the 14 U.N. sanction regimes are imposed on African nations.

First Deputy Permanent Representative Dmitry Polyanskiy spoke for the Russian side, warning that UN “sanctions must never be used as a ‘punitive’ tool….

“We strongly call for UNSC-imposed restrictions to always remain targeted and flexible. We need to take greater heed of what the authorities of states under sanctions think, be more realistic when elaborating the so-called benchmarks and make sure that they do not turn into a mission impossible.

“By our estimates, many of today’s UNSC sanctions regimes already fall behind the de facto situation, interfering with plans for state-building and socio-economic development….

“Collateral damage of sanctions must be taken seriously, as it devastates the national economy, brings down living standards and the well-being of the population. This problem grew even worse against the backdrop of the fierce COVID-19 pandemic. We hear words that the Security Council’s restrictive measures must not have a bearing on the life of ordinary people, but unfortunately when it comes to the practical impact of such restrictions, they often trigger deterioration of socio-economic situation in countries that live under sanctions…. We are convinced that UNSC sanctions machinery needs to be ‘humanitarized’….”

He had even harsher words against “the malignant trend” of unilateral sanctions imposed by countries outside the UNSC, by individual countries or groups of countries, which often include sanctions on third parties who break those “unilateral” sanctions. Polyanskiy cited, as he went along, examples of the damage resulting from UNSC and unilateral sanctions, ranging from the freezing of assets of Afghanistan and Libya, to the sanctions against Syria, Yemen, Venezuela, Iran, the Central African Republic, Sudan, Guinea Bissau, and the DPRK, including the 60 years of sanctions against Cuba. According to the UN rapporteur’s report on the debate, U.S. Ambassador Linda Thomas-Greenfield shamed the United States, putting up a strong defense of sanctions for allegedly improving lives, asserting adamantly the U.S.’s right to impose unilateral sanctions, because imposing them through the United Nations Security Council is often blocked by “certain members.” She had the temerity to assert that humanitarian exemptions “ensure that the pain of sanctions do [sic] not affect ordinary people,” daring to claim this as true in Afghanistan, Yemen, the Democratic People’s Republic of Korea, and Somalia.