Zepp-LaRouche: the Unipolar World Is Over; We Need a New Model of International Relations 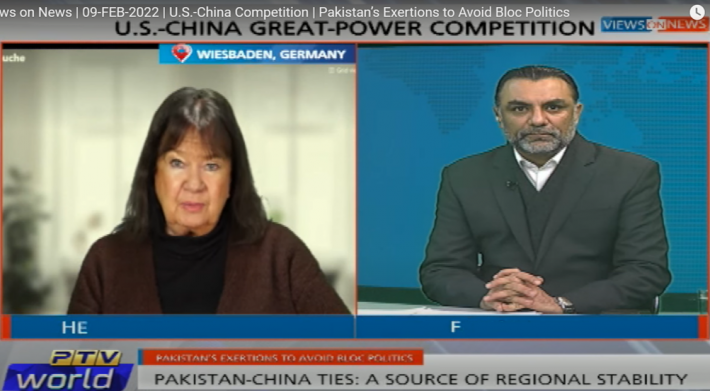 Zepp-LaRouche: the Unipolar World Is Over; We Need a New Model of International Relations

Feb. 9 (EIRNS)—“The world is currently in an incredibly dangerous situation, with a Cold War that threatens to become a hot war at any moment,” Helga Zepp-LaRouche stated in an interview on Pakistan PTV World’s “Views on News” broadcast today. We are the proverbial 100 seconds away from the midnight of a nuclear catastrophe, a war danger that is playing out around the extreme tensions around Ukraine. The United Kingdom and the United States are putting massive pressure on Europe to fully join the drive to push Russia into a strategic corner and launch scorched-earth economic sanctions and attacks on that country. But, as of this moment, Europe is not fully on board—as can be seen in German Chancellor Olaf Scholz’s trip to Washington, and especially French President Emmanuel Macron’s six-hour discussion in Moscow with Russian President Putin. They are increasingly aware that the current policies of confrontation, driven by the breakdown of the trans-Atlantic financial system, cannot continue, or they will succeed in blowing up the entire world.

But we are also witnessing the beginnings of a gigantic international political and economic realignment as well. “I think we should not underestimate the incredibly historic meeting which took place between Chinese President Xi Jinping and Russian President Vladimir Putin during the Olympics, where they concluded a new strategic partnership which is a new model for international relationships,” Zepp-LaRouche stated. What this reflects is the fact that the unipolar world is over, and countries around the world—from Pakistan to Argentina to Hungary—are responding to that new reality. “It takes politicians and the media a while before this reality sinks in,” Zepp-LaRouche noted.

“Europeans right now are really completely scared about the possibility of the Ukraine crisis going out of control,” Zepp-LaRouche noted, “and they are trying to put a new model on the table. But I believe that something else is needed. We are right now at a branching point of all of history, and we need a new model of international relations, where thinking in terms of geopolitics, in terms of blocs, in terms of wars of one against the other within a zero-sum game—this has to be overcome.” A new international security architecture based on the universal economic development of all nations must be forged, even as we stand at the very edge of a terrible existential danger. “We must fill people with hope that it can be accomplished,” Zepp-LaRouche told a meeting of Schiller Institute associates today. Americans in particular must ensure that the United States joins with Russia and China in forging constructive solutions to the world’s problems. The Pakistan PTV program was titled, “U.S.-China Competition – Pakistan’s Exertions to Avoid Block Politics.”  {A transcript with only Mrs. Zepp-LaRouche’s remarks during the interview is at this link.}