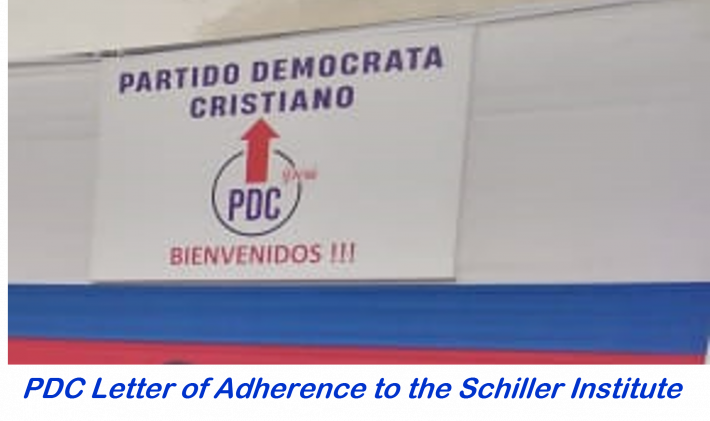 Jan. 24 (EIRNS) – The Christian Democratic Party of Peru, through its President Carlos Gallardo, issued the following Letter of Adherence to the Schiller Institute on Jan. 23:

Mrs. Helga Zepp-LaRouche, founder of the Schiller Institute: I would like to take this opportunity of our gathering for the celebration of the 66th anniversary of the Christian Democratic Party of Peru, of which I am honored to be President, to personally express that we and the Schiller Institute are united by a coincidence of philosophical principles and economic policies which you so fervently and courageously promote universally. For that reason, as President of the Party and on behalf of our membership, I formalize our Adherence to the Schiller Institute.

The world is going through one of the most acute and dramatic crises of modern history. Plague, war, hunger, and poverty threaten the existence of mankind and nations. Everything seems lost. However, as we have already shown, we are the only species created in the image and likeness of God, with the ability to completely turn that process around, which now appears to be fatal. The crisis is a result of the fact that what has ruled the world in recent decades is: policies of confrontation, a geopolitics of exploitation, a stark neoliberalism that has legitimized usury, and the imposition of the interests of minority groups over the interests of the great majority and the common good. The class struggle that the left and right elites are trying to impose will worsen this situation.

The hope lies in returning to the ideas so beautifully presented by Cardinal Nicholas of Cusa, of the common good, of establishing and carrying out solutions that benefit all. These are the principles that the Schiller Institute and the Christian Democratic Party of Peru share.

As can be seen in China’s Belt and Road proposal, it is possible to adopt and implement a program of physical infrastructure development and to bring science and technology capabilities to the entire world. It is possible to “make development the name of peace” a universal initiative, which the western powers, and especially the United States, should join. In that way, happiness and joy could be brought to the immense majorities who are suffering, especially our youth.

Our optimism comes precisely from our ability to be able to rapidly forge a worldwide political alliance on behalf of these initiatives, which will bring shared benefits and development.

I would like to announce to our membership that, in order to accelerate our goal of making politics an educational process for our nation and thereby return to the true meaning of political activity – that is, the quest for the common good – our Party will begin a seminar on the Christian Science of Physical Economy, an approach that the late great thinker Lyndon LaRouche so brilliantly synthesized and which will be the indispensable basis for the formulation of our economic and political program for our Peru.