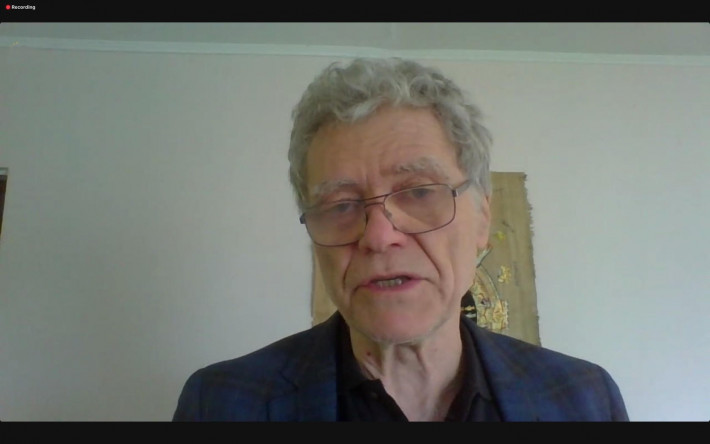 Aug. 8, 2022 (EIRNS) Copenhagen–The Danish Russia-Ukraine expert Jens Jørgen Nielsen, a speaker at the Danish-Swedish Schiller Institute May 25, 2022 online conference who is on the Ukraine blacklist, was interviewed Aug. 3 for 13 minutes on Radio 24/seven (24/syv) about his appearance on the list. Radio 24/seven is the leading Danish national private radio. That was followed by an interview with Søren Liborius, a Danish leading consultant for the EU’s joint foreign ministry, and former information and press director in the EU foreign ministry office in Russia. They are interviewed by Nicolai Dandanell. Here is a summary of his remarks:

Jens Jørgen Nielsen: The people on the list have different opinions, even one who is for sending weapons to Ukraine. [Nielsen did not mention the Schiller Institute in this connection, although he has done so in other media].

Nielsen said that he is not spreading Russian propaganda, but he is critical of sending weapons to Ukraine, and critical of the narrative that Ukraine is a flowering democracy. That the leader of the disinformation office labeled the people on the list “information terrorists,” who should be tried before a military court, is absurd. The office is supported by the U.S. State Department. He said that he disagrees with the Russian decision to invade, but there has to be a serious discussion, because this is the most dangerous crisis since WWII.

Zelensky has banned 11 parties, and put people under house arrest without a court decision. It is not, as the narrative goes, a battle between democracy and dictatorship.

What does the list mean? Nielsen said he doesn’t think there will be consequences, but will agents come to my house to bring me before a war criminal tribunal?

There is no problem for people to discuss the content of what I said.

This may lead to a comment from the Danish Foreign Minister [who is now required to answer two written questions posed by, Marie Krarup, a member of the Danish Parliament’s Foreign Policy Committee, in a “Consultation” before the committee.]

The fact that Ukraine is threatening Western citizens with being brought before a war criminal tribunal is crossing all red lines. Putting us in connection with war criminals from Yugoslavia and Rwanda, mass murderers, is absurd.

When asked if he is spreading Russian disinformation, Nielsen replied that most of what is in the press is disinformation, from the Ukrainians, the Russians also do it, and in the West. There is no objective narrative in war. I am an historian, and there is war propaganda on all sides.

I understand that Ukraine is afraid of Western war fatigue – will they continue to send weapons? Is it money out of the window? I and others are asking: Can Ukraine win? Can they win without a nuclear war? It is necessary to pose these questions.

I was accused of saying that Ukraine had sent 30 times the previous amount of bombs into the Donbass in the week before Feb. 24. But I have this figure from the OSCE (Organization for Security and Cooperation in Europe). Are they saying that the OSCE is on Putin’s disinformation pay list?

What are the consequences of being on the list? I want to go to Ukraine at some point. Will they let me in? Will I be arrested? Will I be attacked by Ukrainians who live here [in Denmark]? Sometimes I translate for Ukrainian refugees. I can’t imagine that they will come to my house and attack me.

Program headline: Ukraine’s blacklist is an expected part of the information war being fought between Ukraine and Russia.

He says that Ukraine is in a fight for its existence, and is responding to the Russian disinformation campaign, which he is not surprised about.