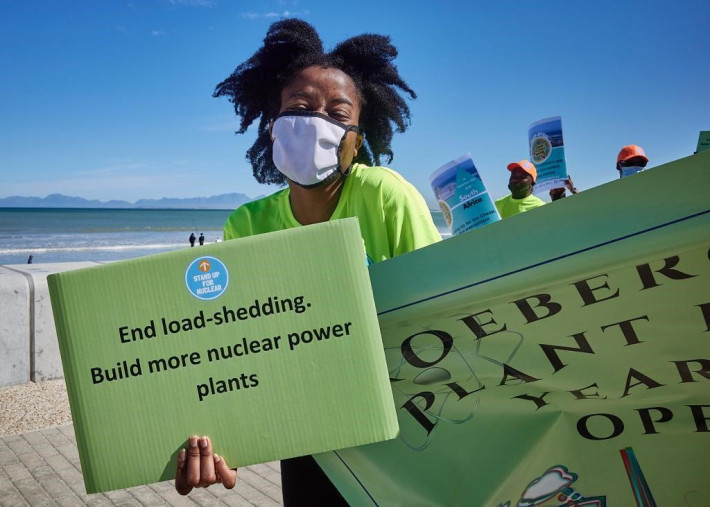 Sept. 30 (EIRNS)—Despite the green psychosis that has overtaken South Africa, more than 400 South Africans participated in the annual “Stand Up for Nuclear” events on Sept. 18 in Pretoria and Cape Town, and at the proposed nuclear site, Thyspunt.

Despite demands from the international bankers that coal be abandoned—even while South Africa is overwhelmingly dependent on coal for generating electricity—South African public opinion about nuclear energy is still ambivalent, at best. “Stand Up for Nuclear South Africa” and related efforts intend to change that.

The main event was a three-mile walk across the township of Atteridgeville in Pretoria to the Phatudi Comprehensive School, where Zizamele Mbambo, Deputy Director General of Nuclear in the Department of Mineral Resources and Energy, gave the keynote address.

On the streets, the activists—equipped with loudspeakers, banners and posters—demanded that government include nuclear in the green finance taxonomy. They engaged the surrounding communities on the merits of nuclear energy, including its huge potential to end load-shedding (power shut-offs, now 25% of the time) and reduce the cost of electricity.

The coordinator for Stand Up for Nuclear South Africa, Princess Mthombeni, told Executive Intelligence Review that “we are planning other initiatives such as the upcoming energy debate, as well as outreach programs that aim to engage communities and other stakeholders such as trade unions.”

Stand Up For Nuclear SA is a program of trade union NEHAWU’s Professionals Technical Committee, in collaboration with other organizations including South African Young Nuclear Professionals Society and Women in Nuclear South Africa. NEHAWU is the National Education, Health and Allied Workers’ Union.

Stand Up for Nuclear is also held annually in more than 80 cities around the world, including New York, Seattle, Paris, and London; the number is growing. The South African organizers say that it has been led since 2016 by Environmental Progress, an American environmental movement led by Michael Schellenberger, to inform societies about the harmful effects of the indiscriminate expansion of renewable energy and the necessity of nuclear power.