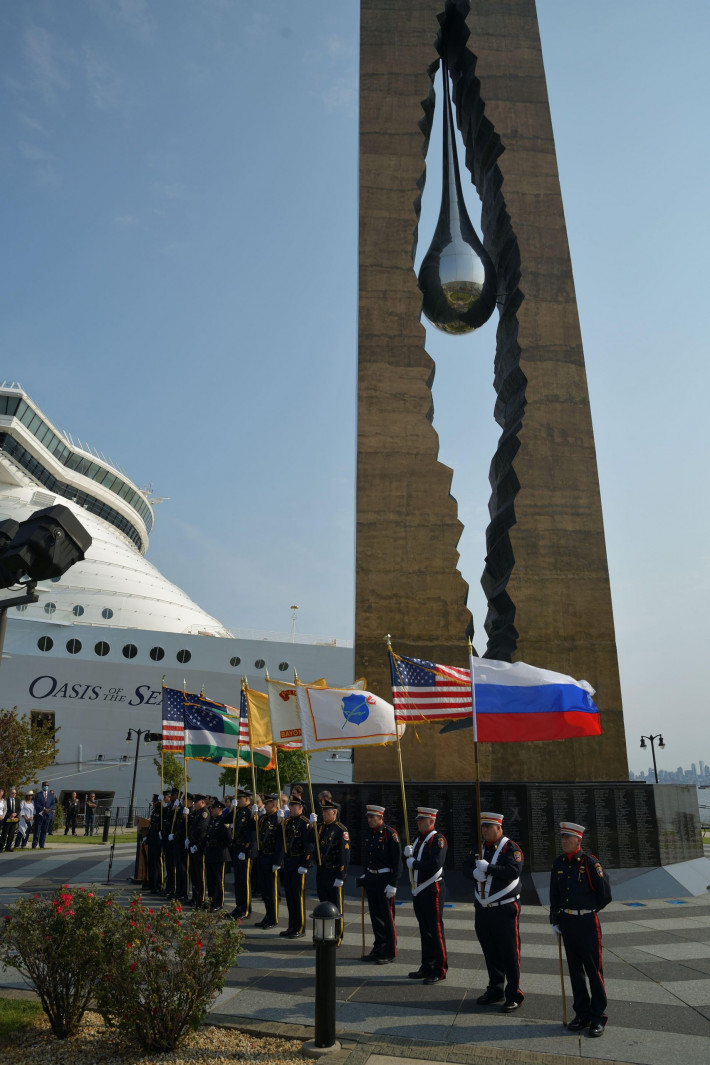 Sep. 15 (EIRNS)–On Sunday, September 12, The Schiller Institute, with the support of the Russian Embassy in the United States and the Consulate General of Russia in New York, organized a Memorial Ceremony to mark the 20th anniversary of the mass terrorist attack on the US. To honor those who perished and in support of their families and survivors, an event was held that day at the monument in Bayonne, N.J. known as the “Tear of Sorrow,” and more formally, by its title: “To the Struggle Against World Terrorism.” This sculpture was designed by Zurab Tsereteli, the president of the Russian Academy of Arts, and erected in Bayonne by a team of Russian artisans in 2005.

The Memorial Ceremony was addressed by Terry Strada, chairwoman of Families and Survivors United in the Struggle Against Terrorism, and by many American and Russian government officials, and Police and Fire first responders. There was widespread press coverage in Russia. Media covering the event included: TASS, RIA/Novosti, Komsomolskaya Pravda, Regnum.ru, Yandex.ru, NTV, Russkiymir.ru, and Expert.ru.

The article in Komsomolskaya Pravda begins:

“To see the Russian and American flags flying together has been an almost impossible task in recent years. Nevertheless, Moscow and Washington have common interests, common values, and common memory. Not only in our countries, but throughout the civilized world, they remember the mournful date – the 20th anniversary of the terrorist attacks in the United States.”

A rough translation follows of the article by the TASS Washington Bureau correspondent is as follows:

Schiller Institute President Helga Zepp-LaRouche says: It’s Time to Put an End to the Era of Geopolitics, an Era of Not Achieving Common Goals

BAYONNE / NJ /, September 13. / TASS /. On Sunday, Russian and American participants in the ceremony at the Tear of Sorrow memorial by Zurab Tsereteli honored the memory of those killed in the September 11, 2001 terrorist attacks and stressed the importance of jointly combating common threats. The event, organized by the Russian Embassy in Washington, the Consulate General in New York and with the participation of the Permanent Mission of the Russian Federation to the UN, began with the performance of the anthems of the two countries, the solemn presentation of national flags, then, the audience bowed their heads in prayer for those who did not return that day 20 years ago.

Was There a Conspiracy? U.S. Publishes 9/11 “Secret Files”

Terry Strada, of Families and 9/11 Survivors for Justice Against Terrorism, spoke via audio link about the recently declassified FBI material and about the circumstances of the terrorist attack. She highlighted the need for further action. “New documents have been released, but the country needs to do more,” she said.

According to one of the Memorial organizers, chairman of the “Schiller Institute” Helga Zepp-LaRouche, it is time to put an end to the era of geopolitics, of failing to achieve common goals. “It is time to unite, especially the United States and Russia, given the several periods of history when [this] cooperation was beneficial to all of humanity,” Zepp-LaRouche said, in a message to the Memorial.

Russian Consul General in New York Sergei Ovsyannikov drew attention to the fact that over the years since the tragedy, international terrorism has only gained strength. No power is capable of overcoming this evil alone, the diplomat emphasized.

The American guests of the ceremony especially noted the fact of the gift of the monument, created by the President of the Russian Academy of Arts (RAA) Tsereteli.

Kirk Wiebe, a former analyst with the U.S. National Security Agency, switched to Russian in his speech. “We all have gathered here in an atmosphere of brotherhood, friendship and love. We Americans sincerely thank you for such a monument. Know that we are always with you both for the truth, and in the fight against terrorism,” he said.

The representative of the Schiller Institute in New York, Richard Black, told reporters that, despite the serious tensions in relations between the two countries, there was “genuine solidarity at this event, where Russians and Americans, both officials and ordinary citizens, stand for the same values – the right to life, to freedom, the right to live happily with one’s family.”

“Many people understand, in the small communities, that our peoples, American and Russian, have the same interests,” he added.

The expert stressed the importance of contacts at the highest level, including the statement adopted at the end of the Russian-American summit in Geneva on June 16, in which the principle was affirmed: “a nuclear war cannot be won and should never be fought.” “This is a significant advance, because some in the Pentagon and in the State Department have stated differently: that a nuclear war can be won and the United States must be determined to win,” said the spokesman for the institute.

In addition, Black considers it necessary to organize a summit of the “five” of the UN Security Council, as initiated by Russian President Vladimir Putin. According to him, the proposal is very relevant. “There are urgent topical issues – the fight against international terrorism, the coronavirus pandemic. I hope that we will be able to convince the U.S. President to agree to the initiative. These are very important matters, now, more than ever,” the expert said.

The Tear of Sorrow monument to the victims of international terrorism was presented by the United States as a gift from Russia. Putin took part in the groundbreaking ceremony in 2005.” The ceremony can be viewed at this link.