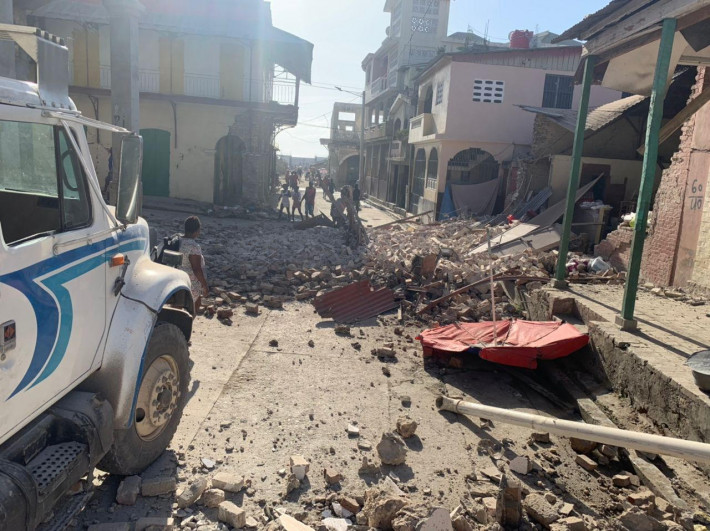 Sept. 1 (EIRNS)—A focus of humanitarian aid to Haiti right now is to get food, water, tarps, tents and medical supplies into those remote rural areas in the mountainous Southern peninsula, only accessible by helicopter. Partnering with USAID or with other Haitian or foreign charities, eight military aircraft from the U.S. Southern Command are carrying supplies to these small communities to meet their immediate needs and stock them with supplies to face the months ahead. Multiple trips are made daily from the Port-au-Prince airport. Residents of these communities have lost everything– crops, livestock and even the ability to leave, as roads have been destroyed by the earthquake or mudslides caused by Tropical Storm Grace.

Food is urgently needed. According to the World Food Program, in the three most severely-affected departments, Sud, Grand’Anse and Nippes, the number of people in need of urgent food assistance has increased by one-third since the quake, from 138,000 to 215,000. A year ago, the UN had warned that 4.4 million Haitians (42% of the population) faced acute food insecurity; and the country ranked 104th out of 107 on the Global Hunger Index. Now, Lola Castro, WFP’s regional director for Latin America and the Caribbean, said in a statement that “the earthquake rattled people who were already struggling to feed their families. The compound effects of multiple crises are devastating communities in the south faced with some of the highest levels of food insecurity in the country,” News Americas reported her saying Aug. 30.

The WFP is committed to providing food, shelter and medical aid to 215,000 people in the three southern departments—although the need extends well beyond those three. The UN’s Office of the Coordinator of Humanitarian Affairs (OCHA) has launched an appeal for $187.3 million in order to reach 500,000 affected people, although the agency’s Aug. 31 report indicated that at least 650,000 are in need of emergency humanitarian assistance. The World Bank’s sustainable development and infrastructure program did an initial damage assessment of $1 billion but this is expected to increase with more extensive assessments.

In its Aug. 31 report, OCHA also pointed to the growing risk of a major COVID-19 outbreak. Such preventative measures as mask wearing and social distancing are “compromised due to the current operational context,” OCHA notes, adding that less than 1% of Haiti’s 11 million inhabitants has been vaccinated. Nor are there vaccines! The country has received only 500,000 doses through the COVAX facility. PPE is scarce. Poverty, poor sanitation, lack of clean water and the fact that people are gathering in close quarters seeking food assistance and shelter are all risk factors. Argentina’s Telam news agency quoted OCHA warning that the possibility of “new and more contagious and dangerous variants reaching the island is particularly worrisome during the weeks and months following the earthquake as the country’s healthcare system lacks the ability to respond to a COVID outbreak.” Detailed OCHA fact sheet is here.