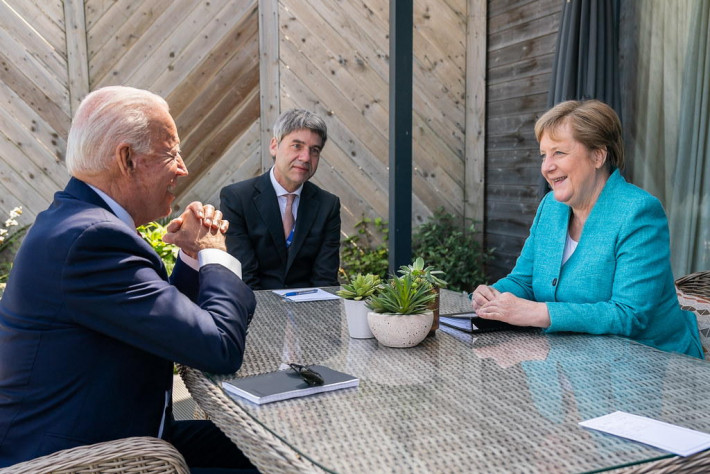 July 21 (EIRNS) –In comments to the press yesterday, State Department spokesperson Ned Price reiterated President Joe Biden’s recent statement that the United States suspended its sanctions against Russia’s Nord Stream 2 pipeline project because they could hardly prevent the project’s completion. He explained that President Biden couldn’t have been any clearer when he met with Chancellor Merkel last week: “We continue to oppose Nord Stream 2. … We continue to believe it’s a bad deal for Germany, it’s a bad deal for Ukraine, it’s a bad deal for Europe and Europe’s broader energy security goals.” And, “of course in May we imposed sanctions on 19 entities and vessels, and at the same time … we have come to the conclusion … that it was not in our interest to significantly undermine … the relationship we have with our ally, Germany for a pipeline whose construction would continue, nonetheless.”

Price commented on reports by Bloomberg News that the U.S. and Germany were close to reaching an agreement on Nord Stream 2 that will reportedly include a provision that Germany will impose sanctions on Russia should Moscow use the pipeline to pressure Ukraine or engage in other “aggressive” behavior. “The Germans have put forward useful proposals…. That shared goal is ensuring that this pipeline cannot be weaponized against Ukraine, against any other European partner. That is our goal in doing so. I do expect we’ll be able to share more details on this today.”

State Department Counselor Derek Chollet arrived in Ukraine for discussions yesterday, and then headed for Poland which also opposes Nord Stream 2. According to Bloomberg, the draft agreement with Germany would seek to promote investments of as much as $1 billion in a so-called Green Fund to help Ukraine’s transition to cleaner sources of energy. Germany reportedly would commit to an initial $175 million investment in the fund, and would also appoint a special envoy—with $70 million of funding—to support bilateral energy projects with Ukraine.

Meanwhile, in a posting to his website, Senator Ted Cruz (R-TX) denounced the reports of an administration agreement, growling that, “If the reports and details of a deal are accurate, this will be a generational geopolitical win for Putin and a catastrophe for the United States and our allies. President Biden is defying U.S. law and has utterly surrendered to Putin.”