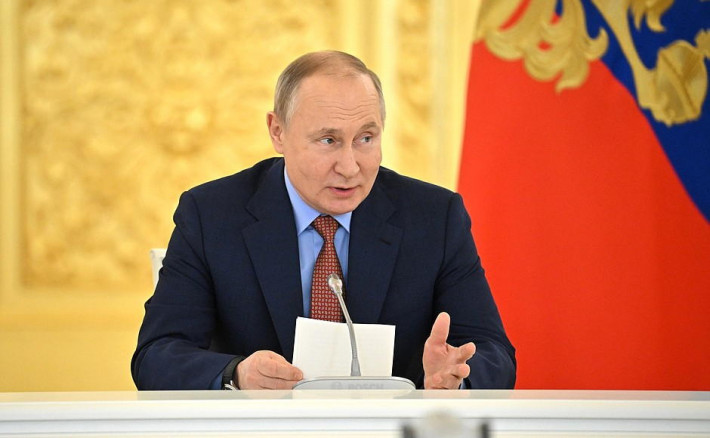 May 26 (EIRNS)— “It is time to draft a comprehensive strategy for developing large-scale Eurasian partnership,” conceived as a “civilizational project” which can secure stability and prosperity from one end to the other of this continent, Russian President Vladimir Putin proposed to the plenary session of the Eurasian Economic Forum today. He pointed to the expressed interest of BRICS members such as China and India, the Shanghai Cooperation Organization, ASEAN, and others, in creating a Greater Eurasian Partnership with the EAEU.

Putin dismissed any idea that Eurasian integration is a reaction to Western sanctions. Rather, it arose from the recognition years ago that the center of world economic development is shifting towards the Asia-Pacific region, he said. It offers a broader vision:

“Greater Eurasia is a big civilizational project. The main idea is to create a common space for equitable cooperation for regional organizations. The Greater Eurasian Partnership is designed to change the political and economic architecture and guarantee stability and prosperity on the entire continent – naturally, taking account of the diverse development models, cultures and traditions of all nations.”

He acknowledged, naturally, the attempts to cut off Russia, and its Eurasian Economic Union (EAEU) partners, from advanced Western technologies and the world economic system. Western sanctions are intensifying global crises, creating chaos and economic upheavals, and ruining the economies of those imposing them (and stealing other’s reserves), but they are “unrealistic… There are many countries that want to and will pursue an independent policy and their number is growing. No world policeman will be able to stop this global process. There will not be enough power for this and the desire to do so will evaporate due to a host of domestic problems in those countries. I hope they will eventually realize that this policy has no prospects whatsoever,” Putin said. Western countries’ belief that they can “delete from the world economy, politics, culture and sports,” anyone who has their own point of view and is ready to defend it, “is nonsense.”

Russia, for example, is not merely focused on import substitution, or worried about those who will insist on importing their luxury Mercedes S 600’s. “For the country, … engineering centers, scientific centers that are the basis of its development are what is important. This is what we should think about, and what she would work on both within the Eurasian Economic Union and in a broad sense with our partners – those who want to work with us.”

Putin reported that the EAEU “roadmap for industrialization” has over 180 projects with a total investment of over $300 billion and a program for agricultural development, with more than 170 projects worth $16 billion. Already, 75% of the trade between EAEU member states is done in national currencies, and work is ongoing to interlink national payment systems and bank cards. Dialogue on “transitioning from SWIFT to direct correspondent contacts between the banks of the friendly countries” should be expedited, and cooperation with key lending and financial centers in the Asia-Pacific Region strengthened, he urged, amongst other ideas.