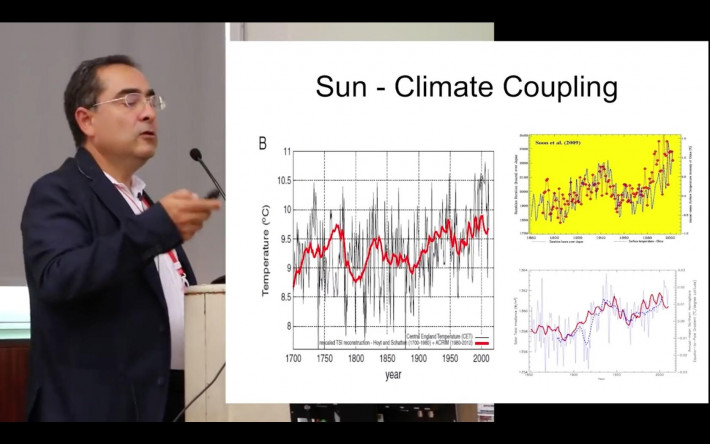 May 28 (EIRNS) — At the first “Climate Dialogues” webinar on May 26, organized by the Padua Association of Engineers and by Galileo magazine, Italian climate scientists have exposed the biased climate models used by the IPCC to justify a so-called “climate emergency” and have praised more balanced Russian and Chinese climate models. They have also warned against the new IPCC report, expected to be issued soon, which is based on questionable 2019 charts. There will be seven more webinars between now and October.

Whereas polls show that 97% of scientists agree that we are in a warming phase, only 26% of them are convinced that it is due to human activity to some extent. Therefore, the famous “consensus” reported by the media is fake news. Professor Scafetta does not exclude human participation in climate change, but it considers it secondary to astronomical causes.

The next IPCC report, coming soon, is based on a 2019 chart which is very problematic, Scafetta said, because it puts together a series of inconsistent data for the purpose of demonstrating their hypothesis. There is a 1,000-year cycle determined by solar activity, which IPCC simply ignores, which is unacceptable.

What is interesting, in his view, are the indices of climate sensitivity that measure climate variations when CO2 doubles. Here, Chinese and Russian models show much lower indices than the Western ones (in particular Canadian models.) The Chinese and Russian results are converging on real historical data, and they have a higher rate of forecasting actual temperatures.

Professor Scafetta was preceded by Massimo Coccato, chairman of the Padua Association of Engineers, Galileo editor Enzo Siviero and by Prof. Alberto Prestininzi, founder and chief editor of the Journal of Engineering Geology and Environment. Both Scafetta and Prestininzi are among the initiators of the 2019 “There Is No Climate Emergency” manifesto of 200 Italian scientists, which became an international group of over 500 scientists by October 2019. Since then, at least another 300 scientists have signed the manifesto.

Siviero, who moderated the event, announced the cycle of “climate dialogues,” which is open to all opinions based on scientific data. In order to be a good engineer you need to be a great humanist, Siviero said.

Professor Prestinizi regretted that supporters of man-made climate change won’t undertake a scientific debate with critics. The debate occurs in the media instead of within scientific forums, while hundreds of millions of people in the world, whose primary fuel source is coal, have no adequate access to electricity. He gave a short historical review of climate hysteria, highlighting the example of the “hockey stick” curve, which was ruled to be false even by a court. In 1977, the IPCC forecast a sea level increase of 6 meters by 2030. Eventually, they revised their forecast and the most recent ones say the increase will be between a half and 1 meter.