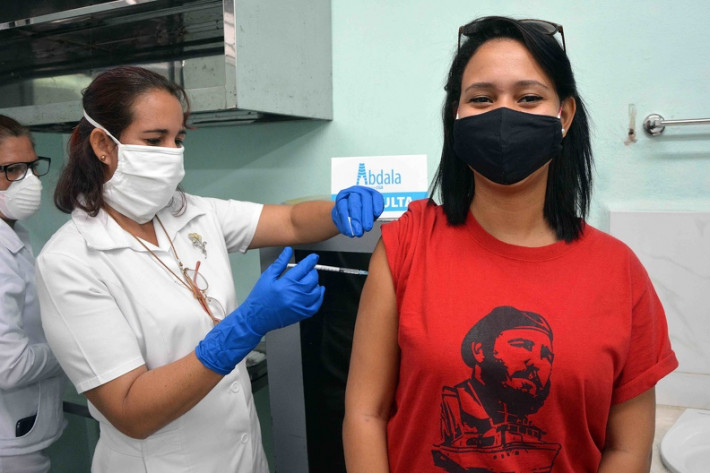 Cuba Has Vaccinated One Million People With Its COVID Vaccine; Plans to Immunize Entire Adult Population This Year

May 26 (EIRNS)–Cuba has now vaccinated one million people with its Soberana 2 and Abdala COVID vaccines, both of which are in late-stages of Phase 3 trials, and are two of five vaccines being developed. A sixth vaccine, known as Pan-Corona, is being developed with the Chinese, described as a next-generation vaccine which is more effective against various SARS-CoV-2 strains, Telam news agency reported May 22. Both vaccines require 3 doses. Soberana 2 was developed by Cuba’s prestigious Finley Vaccine Institute which in 1989 developed a vaccine for Meningitis-B. BioCubaPharma, Cuba’s state-run biomedical company, developed Abdala, and its president Eduardo Martinez Diaz estimates that all of Cuba’s adult population will have been vaccinated by the end of this year.

Cuba is experiencing a surge in cases, as are many Caribbean and Central American nations. Health Minister Jose Angel Portal estimates that by the end of June, 22.6% of the population will have been vaccinated; 33.5% by the end of July, and 70% by the end of August. Cuba’s regulatory agency is expected to approve emergency use authorization, at least for Soberana 2, in June, at which point the government can begin its mass vaccination program. Those currently being vaccinated are volunteers from high-risk groups, healthcare workers or residents of those regions most severely affected by COVID. This achievement has provoked the ire of the {New York Times} which published a teeth-gnashing article May 12 complaining that the island government is administering “home grown vaccines that have not been shown to work.”

Other developing nations have no such qualms about obtaining Cuban vaccines, which are the product of its state-of-the-art biomedical/biotechnology industry which has been developed over decades. Iran, Argentina, Mexico, Jamaica and Vietnam, among others, are interested in obtaining the vaccine. Today, Argentina’s Health Minister Carla Vizzotti and presidential adviser Cecilia Nicolini arrived in Havana, to meet with officials to discuss how the Soberana 2 and Abdala vaccines were developed and whether they can be mass-produced, the daily {Infobae} reported today. The Argentine government is already in negotiations with Cuban officials on purchasing the vaccines, once Phase 3 trials are completed, and is interested in determining whether Argentina can eventually participate in producing them. Because the Soberana 2 vaccine doesn’t require refrigeration, it is especially attractive to developing countries.