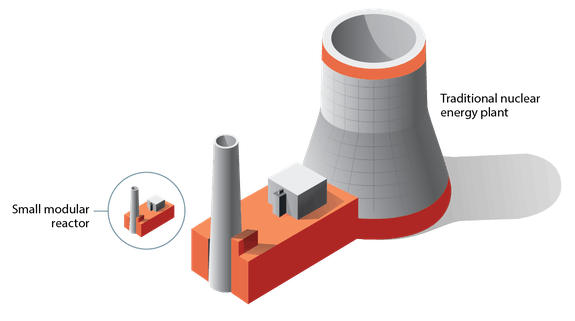 Two interesting nuclear events occurred roughly two months ago: South Africa’s Energy Minister proclaimed that South Africa was seeking offers of up to 12 small nuclear reactors to add 2,500 gigawatts to its grid; and the United States’ International Development Finance Corporation (DFC) moved decisively to end the ban from the Obama Administration on financing nuclear power development projects abroad. IFDC was actually a new and better capitalized successor to the old Overseas Private Investment Corporation (OPIC), and was created by bipartisan legislation pushed through by the Trump White House in 2018 (that’s right, bipartisan). DFC came to be referred to as “America’s development bank” by its head, long-time Jared-Kushner associate Adam Boehler. It has just taken on transport infrastructure projects in Serbia and Kosovo as part of the Trump Administration’s mediation effort between them.

These two steps toward advanced nuclear reactors are now bearing fruit. NuScale Power LLC, the only company thus far to have NRC approval for its small modular reactor (SMR) design, has gotten a letter of intent for the 2500 MW project in South Africa from the U.S. DFC. {Neutron Bytes} reported Oct 18 DFC’s letter of intent to support Oregon-based NuScale in developing the 2,500 megawatts of power with its 60 megawatt SMR. Just days earlier, it reported, the U.S. Department of Energy committed $1.355 billion to Utah Associated Municipal Power Systems to keep it on track as NuScale’s first U.S. customer for its SMR. That 12-SMR plant will be built Idaho National Laboratory but provide power mostly to the Utah utilities, which were concerned about depressed electricity demand and therefore financing.

The South African program is called the independent power producer (IPP) program, and its time scale is not yet definite. In a statement to Bloomberg News Oct. 16, NuScale said, “If successful, NuScale would be the first U.S. nuclear energy IPP on the continent and would help support energy resilience and security in one of Africa’s leading economies.” The letter of intent is not yet a funding commitment.

At the same time Power Magazine reported Oct. 14 that two other American advanced nuclear design firms, TerraPower and X-energy, will each receive $80 million in initial federal funding under the Department of Energy’s (DOE’s) Advanced Reactor Demonstration Program (ARDP) to build their two distinct advanced nuclear reactors and begin operating them within seven years. Bellevue, Washington–based TerraPower, founded by Bill Gates, will demonstrate the Natrium reactor, a 345 MWe sodium-cooled fast reactor that it unveiled last month as part of a consortium that includes GE Hitachi (GEH) and Bechtel. Maryland–based X-energy plans to deliver a commercial four-unit power plant based on its 80 MWe pebble-bed high-temperature gas reactor (HTGR), which can be scaled as a four-pack to 320 MWe. The DOE plans to invest $3.2 billion overall, with matching funds from industry, over the seven-year demonstration program, subject to future appropriations.