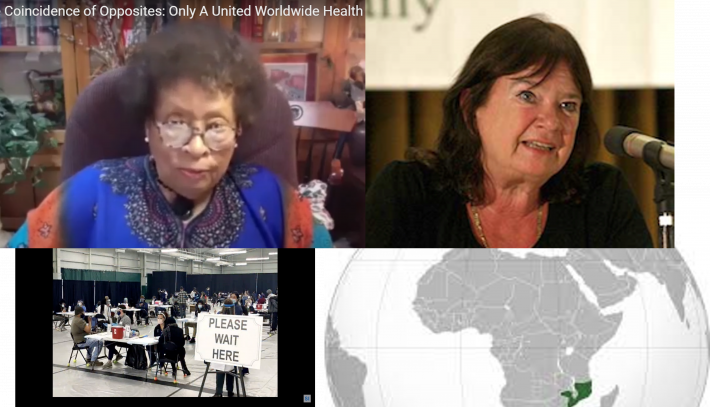 May 15, 2021by Mary Jane Freeman in Activity of the Schiller Institute, Agriculture, COVID-19, Economic development updates, General updates, Healthcare, Healthcare, Our initiatives (petitions, etc), Power & Energy, The Committee for the Coincidence of Opposites

May 14 (EIRNS)–The following statement was released today by the Committee for the Coincidence of Opposites, for the Global Health Summit in Rome, May 21, 2021, and for general circulation.

The only way that the prolonged COVID-19 pandemic can be stopped, is by re-thinking the solution. We must have modern health care systems in every country. This means infrastructure for public health, and for medical care delivery at modern standards, to all populations. One model for this is the U.S. Hill-Burton Act (“Hospital Survey and Construction Act of 1946,”) whose principle was to state how many hospital beds per 1,000 residents must be in each locality (at that time, 4.5), and deploy accordingly to build them, including modern equipment and staff.

Look at instances of our ability to do this today. The 1,000-bed Huoshenshan hospital was built in 12 days in Wuhan in 2020. In the U.S., multiple field hospitals were built in record time last Spring by the U.S. Army Corps of Engineers. We must do this simultaneously around the world.

This means that all countries must work together to accomplish this. We must put aside tensions and conflicts for the time being.

There are new strains of the SARS CoV2 that are showing up, that are more aggressive, and more transmissible. These can make vaccines obsolete. “Many of these variants show enhanced transmission and, in some studies, enhanced disease,” was the report in April by Dr. Dan Barouch, an immunologist at Harvard Medical School, who helped develop the Johnson & Johnson vaccine. He said that the variants, “also have the property of being able to partially evade antibodies, and therefore raise the specter as to whether they may reduce vaccine efficacy.” We are in a race against time.

Thus, our response to the pandemic seen in these terms is a question of existential importance to the human species. It requires the cooperation of all major industrialized nations. A new paradigm of coordination among the United States, China, Russia and others is central.

In this spirit, a grouping was formed in June, 2020, called the Committee for the Coincidence of Opposites, to further such international collaboration on large-scale response to the crisis. Co-initiated by Helga Zepp LaRouche, founder and President of the Schiller Institute, and Joycelyn Elders, M.D., former U.S. Surgeon General, the Committee acts on the principle of the “coincidence of opposites” put forward by Cardinal Nicholas of Cusa (1401-1464), which pursues acting on the common good, and deters pitting sub-groups against each other.

The Committee has two pilot projects underway, embodying this principle concretely, in order to promote major government and institutional action. In Washington, D.C. in Ward 8, a team—involving youth leaders–is working to reach full COVID-19 vaccination rates, and initiate ongoing public health measures in the largely poor community. In Africa, a Committee shipment will arrive soon in Mozambique of combined medical, health, water, food and seed supplies, to make the point that both emergency and overall development measures are urgent at all points of need on the globe.

Health security is possible anywhere, only by provision everywhere of sufficient public health infrastructure and medical treatment capacity. This, in turn, depends directly on expanding water, power and food, which is associated with building up industrial capacity, as well as providing for adequate transportation, housing and other basics. Of necessity, collaboration among nations to deal with these tasks means deliberating on how to provide credit, and otherwise deal with the unstable, unjust financial system. Guidelines for a new paradigm for economic development were presented in a report “The LaRouche Plan to Reopen the U.S. Economy; The World Needs 1.5 Billion New, Productive Jobs,” (May 29, 2020, EIR, Vol. 47, No. 22)

The following are summary elements of what is required for health security. For details, see, “LaRouche’s ‘Apollo Mission’ to Defeat the Global Pandemic: Build a World Health System Now!” from April, 2020, by the Schiller Institute.

Hospital systems. There is currently a huge deficit of hospital beds. Today’s world total of 18. 6 million beds needs to be nearly doubled to some 35 million, along with staff and equipment. This calculation is based on the metric set in the post-WW II U.S. “Hill Burton Act,’ for 4.5 beds per 1,000 residents in the community, in order to provide treatment for both routine and surge circumstances. After the U.S. approached this 4.5 beds per 1,000 standard in 1980, the level then dropped back to 2.8 today, due to privatization and deregulation of U.S. health care. The ratio is 0.7 for the nations in the category of “Heavily Indebted Poor Countries.” For example, South Asia is 0.7. Nigeria has 0.5 beds per 1,000, which has one fifth of the population of Sub-Saharan Africa.

A mobilization is necessary for building strategically located military-style field hospitals, in conjunction with vaccination campaigns, while at the same time, moving to launch longer-term construction of durable hospitals, continuing the crash mobilization mode. E.G. In Ghana, there is the national plan for multiple 100-bed hospitals. Depending on the number of beds in each new hospital, the world faces a need for 35,000 new facilities, especially in Africa, Ibero-America and Asia.

Health corps. Vast numbers of doctors, nurses, public health and related staff—technicians, pharmacists, veterinarians, dieticians, administrators, etc. are required worldwide. Meeting this need demands the spectrum of training, ranging from many more teaching hospitals, to thousands of youth training programs for invaluable community health service, beginning with today’s pandemic emergency.
Water and sanitation. One fully-equipped hospital bed requires plumbing for at least 110-120 gallons of water a day. Every nation must have adequate water and sewerage. Today more than two billion people lack access to safe water, sanitation or both. The deployment of temporary sanitation facilities (which could be mass-produced and then distributed) will be a stop-gap measure, while durable improvements in infrastructure are constructed. Building largescale water management systems, for example, comprehensive river basin development in Africa and South America, along with littoral desalination—nuclear powered, as soon as possible—will end the extremes of drought and flooding, and provide millions of skilled jobs in the process.

Electricity. Modern medical treatment, including inoculation, is not possible without reliable, ample electricity, which of course is essential at large facilities. A large, modern hospital can use, roughly 19 million kilowatt hours per year of electricity for its many power requirements, including scanning and data devices, refrigeration, oxygen provision, ventilation, as well as lighting, cooking and cooling.

Science and technology. There must be an expansion of both basic research and development of technologies against diseases, including those affecting animals and plantlife. This is best done by collaboration among R and D institutions throughout the world. We must advance our understanding of viruses, such that in the near future we can do more than react to each new outbreak. In the immediate term, full collaboration on mass inoculation, and on anti-viral treatment regimens are essential to save lives.

“Food is medicine.” David Beasley, Executive Director of the World Food Program reported May 7 that nine million people died from starvation in 2020, more than the official death toll of 3.24 million from COVID-19. “Food is the best vaccine against chaos,” he stressed, early in the pandemic. It is urgent to provide the $5 billion requested by the WFP for extra 2021 food relief, over and above current levels of aid. There are over 270 million people in acute need of food, and another 600 million with food insecurity. Ten nations are in terrible famine—with the Democratic Republic of the Congo and other African nations in the lead, as well as Yemen, Syria, Haiti and other locations. In addition, interventions must be made to support independent family farming in many of the most highly productive agriculture regions in Europe, North America, Australia and South America, whose output is vital, but where the family farmer is being driven out of operation by the transnational food monopolies. Modern agriculture must be rapidly developed in Africa and elsewhere. The goal is to double food production, to ensure nutrition and health for all.

The Global Health Summit is the responsible representation of the world population in this moment of a crisis of Biblical dimensions. This meeting must not end without a decision to start a process of worldwide international cooperation for a crash program to build a modern health system in every single country on the planet, including the necessary infrastructure to sustain that system.