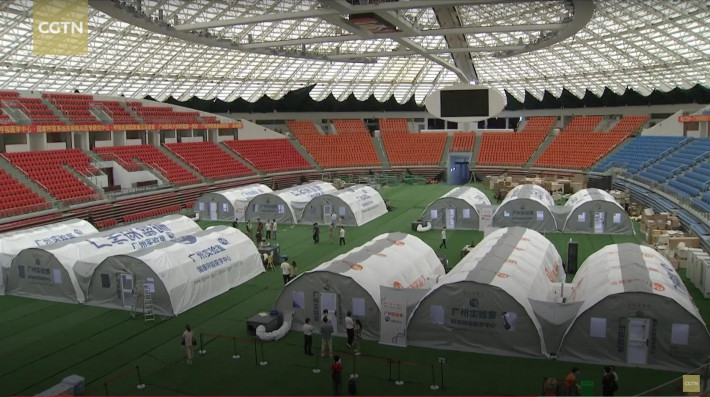 June 11, 2021by madeleine in General, Healthcare

The Chinese take their public health pretty seriously. When the coronavirus pops up in a locale, certainly there is quarantining, and then tracing all the contacts. But mass testing in a few days, whether of a confined neighborhood or of a metropolis of millions, is par for the course.

Guangzhou, a city of 18 million, found their first case of the highly contagious delta variant two weeks ago. Prior to that, they had been averaging about 2 new cases/day of the regular strain, and zero cases on May 24. But on May 26, there was a ‘spike’ of 14 cases, and the public health authorities sprang into action. From May 26 to June 7, about 29 million tests were conducted, where 119 people were found to be infected, seven of which were asymptomatic cases. They are confident that they can surround and finish off the invading enemy virus.

Their massive testing capacity, over two million tests per day, was achieved with the aid of a new, quick-to-assemble mobile testing lab, capable of a million tests per day. The “Huo-Yan Air Lab” can be flown in, transported on a truck, and erected/inflated in ten hours. (Note the time-lapse video) The P2-level lab has an automated nucleic acid extraction robot.

Developed by BGI and Etopia, it has already been exported to a dozen countries, including Saudi Arabia, Ethiopia, Togo, Benin, Gabon, and Kazakhstan. BGI first used an inflatable structure for fighting the Ebola outbreak in West Africa in 2014. “Huo-Yan” means “fire-eye.” It refers to the power of the legendary Monkey King to detect evil hidden beneath covers – or, in this case, the presence of the coronavirus. A spray is being developed to ‘concretize’ the walls, in case it is desired to make the temporary structure more permanent. The same team is working on an inflatable COVID hospital ward design.

Meeting and beating a crisis can be an inspiration.

The required measures to defeat the enemy virus globally will be discussed at the upcoming international Schiller Institute conference.