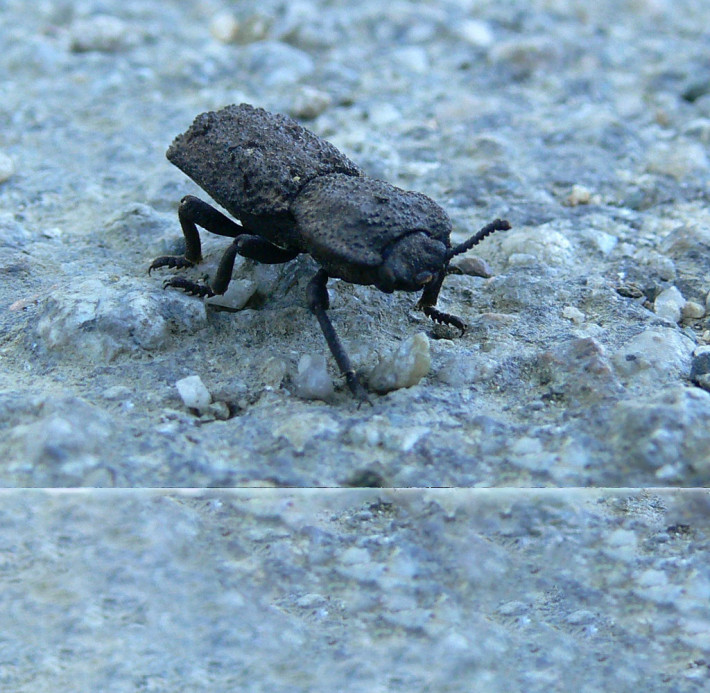 The diabolical ironclad beetle (that’s its name, not an indictment) can withstand a load of 150 newtons, or 39,000 times its own body weight. This would be the equivalent of a human weighing 200 pounds withstanding a force of 3,900 tons. For comparison, a fully-fueled Saturn V rocket weighed about 650 tons.

New studies, led by engineers at University of California Irvine and Purdue University found “the diabolical ironclad beetle’s super-toughness lies in its two armorlike ‘elytron’ that meet at a line, called a suture, running the length of the abdomen.”

All insects, arachnids, crustaceans and shelled mollusks have exoskeletons, which support the muscles on the inside and also provide protection. In most flying beetles, there are two flaps of hard material (“elytron”) which protect their wings, and facilitate flight.

The study, as reported by SciTechDaily and Purdue University, and published in the Oct. 21 issue of Nature, found that the diabolical ironclad beetle doesn’t have wings at all, and the elytra have evolved into a unified section and that “the elytra and connective suture help to distribute an applied force more evenly throughout its body.”

They examined a cross-section of this region (across the short axis), and found that the “suture” region was curved back and forth, very much like a jigsaw puzzle piece, which was interlocking, and allowed flexion and delamination to occur. This allows the structure to flex and deform, rather than immediately snap and break.

“‘An active engineering challenge is joining together different materials without limiting their ability to support loads. The diabolical ironclad beetle has strategies to circumvent these limitations,’ said David Restrepo, an assistant professor at the University of Texas at San Antonio who worked on this project as a postdoctoral researcher in Zavattieri’s group….

“‘This work shows that we may be able to shift from using strong, brittle materials to ones that can be both strong and tough by dissipating energy as they break. That’s what nature has enabled the diabolical ironclad beetle to do,’” said co-author Pablo Zavattieri, whose lab at Purdue carried out some of the studies covered in Nature. Zavattieri is Purdue’s Jerry M. and Lynda T. Engelhardt Professor of Civil Engineering.

A second article in SciTechDaily on Oct. 25 includes further coverage of the UC Irvine and Purdue studies on the diabolical ironclad beetle.

This discovery has exciting implications for not only improving engineering on Earth, but also for building with strong, resilient materials for colonization on the Moon and Mars.