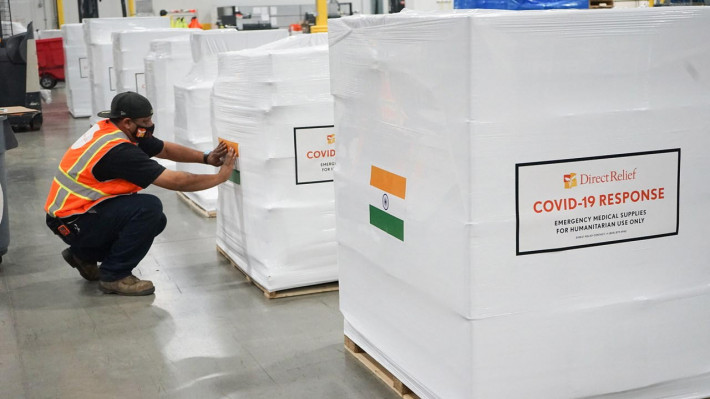 May 5 (EIRNS)–According to India Today, 3,000 tons of aid has arrived in the country so far. That may sound like a lot; but what it boils down to is that this nation of 1.4 billion people, with over 20 million cases of COVID which are growing at the rate of more than a million new cases every three days, has received a grand total of 1,656 oxygen concentrators, 20 large-sized oxygen concentrators, 965 ventilators, and an unknown number of pulse oximeters, Remdesivir packets and some PPE. The Indian government claims that, in some cases, the aid is still in transit. They added that the limited amount of the foreign aid also meant that splitting it up equally was not optimal; so the hardest-hit states were preferred.

This is hardly a serious response to a nation in peril from a global pandemic.

A particular problem is that India’s vaunted vaccine production capacity has been crippled by the Biden administration’s ban on export of vital components, which was only lifted a few days ago after major pressure was brought to bear on Washington. Adar Poonawalla, the CEO of the Serum Institute of India, said that their production of Covishield (AstraZeneca) is now about 60-70 million doses per month, and is able to rise up to 100 million/month by July.

Vaccine doses are desperately needed, given that only 2% of the Indian population has been vaccinated. Last month the government announced that they were now fast-tracking vaccine approval, and on Monday Pfizer announced that they were in discussions with India on providing vaccines. Russia began sending in the first portion of three million doses in May of Sputnik V. And pressure continues to mount on Biden to release the 60 million doses of AstraZeneca warehoused, unused, in the US. That stockpile by itself would double the vaccination program in India this month – nowhere near what is actually needed in this emergency, but certainly helpful.