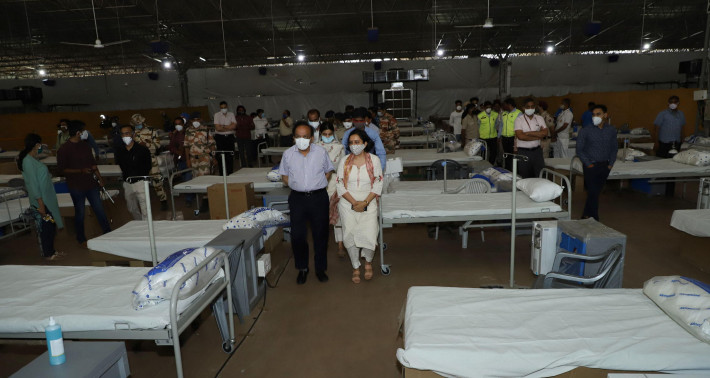 Pandemic Gains the Upper Hand in India; Biden Looks the Other Way

April 25 (EIRNS) – India has reported over 300,000 new COVID infections per day for the last four days – a world record. That means that {one million} people are getting infected every three days in this nation of 1.3 billion. Chinese medical authorities are estimating that the daily rate could rise to 500,000 by June, and that the real numbers are likely much higher than recorded as many homeless people infected with the virus have not been included. The country now has recorded a total of 16.6 million cases, including 189,544 deaths. Worse still, the new strain reportedly directly attacks the lungs and typically causes significant damage before it is even detected.

While much of the international media remains focused on the sheer horror of the collapse of the Indian health system, the deadly lack of oxygen, and the open-air improvised crematoria, the true scandal is that the United States, and other western nations, are not only standing by, but have actually turned their backs on India and are – so far – refusing to send desperately needed vaccines and other medical supplies to India.

Delhi medical and government authorities have been pleading with the US to supply it with Astra Zeneca jabs that have been stockpiled by the Biden administration, as well as the raw materials needed to manufacture COVID vaccines in India. India’s former Foreign Secretary Kanwal Sibal told Sputnik: “The attitude of the Joe Biden administration is very self-centered and selfish. India has been very generous in exporting and donating vaccines to other countries during the COVID pandemic,” said Sibal, who was previously a deputy chief of India’s Embassy in the US.

“The US, on the other hand, wants to create a stockpile to buffer itself against the next wave. Millions are being affected in India due to the virus and the US is effectively ignoring the plight of Indians”, complained Sibal. “The US is sitting on 350 million doses of COVID vaccine which India could use urgently”, he stated.

The raw materials required to manufacture COVID vaccines include bio-reactor bags, cell culture media, and filters, among others. The Serum Institute of India (SII), the world’s largest vaccine manufacturing facility, this week tweeted out an appeal to President Biden urging him to lift the ban on the export of raw materials. The SII claims that its vaccine production has been cut by almost 50 percent due to a shortage of raw materials.

To date, the best the Biden administration has been able to do is send empty words to India: “Our hearts go out to the Indian people in the midst of the horrific Covid-19 outbreak,” Secretary of State Tony Blinken tweeted. “We are working closely with our partners in the Indian government, and will rapidly deploy additional support to the people of India and India’s health care heroes.”