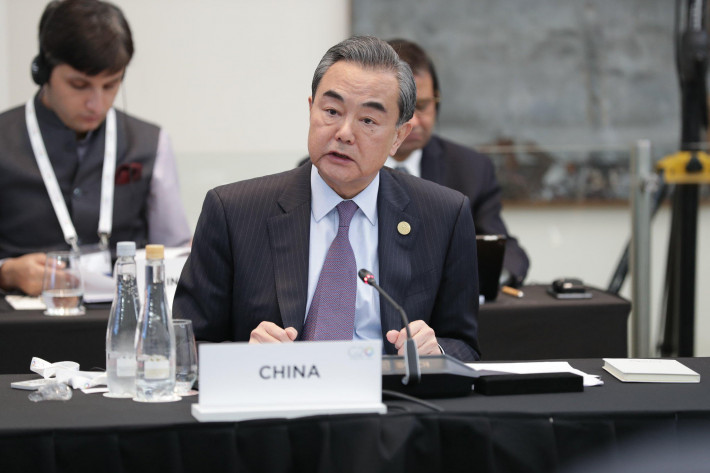 March 28 (EIRNS)- In a March 24 interview with Arabiya newspaper in Riyadh, Saudi Arabia, Chinese State Councilor and Foreign Minister Wang Yi presented a wide-ranging, coordinated Five-Point Initiative on Achieving Security and Stability in the Middle East, better known as Southwest Asia. The March 28 briefing presented the plan’s very important fifth point for economic development of the region. Two other points stand out, as China attempts to shift Southwest Asia from the instability caused by British geo-politics and its plots for war, to a trajectory of peace through development.

On the question of Israel and Palestine, the second point, Wang stated: “Nothing represents equity and justice in the Middle East more than a sound solution to the question of Palestine and earnest implementation of the two-state solution. We support active mediation by the international community toward this objective and holding an authoritative international meeting on this matter when conditions are ripe. In its presidency of the UN Security Council this May, China will encourage the Security Council to fully deliberate on the question of Palestine to reaffirm the two-state solution. China will continue to invite peace advocates from Palestine and Israel to China for dialogue, and also welcome Palestinian and Israeli representatives to China for direct negotiations”

On his fourth point, Wang averred: “In promoting security and stability in the Middle East, the legitimate concerns of all parties should be accommodated. It is important to encourage equal dialogue and consultation, mutual understanding and accommodation and improved relations among Gulf countries. It is imperative to resolutely combat terrorism and advance deradicalization. China proposes holding in China a multilateral dialogue conference for regional security in the Gulf region to explore the establishment of a Middle East trust mechanism, starting with such subjects as ensuring the safety of oil facilities and shipping lanes, and building step by step a framework for collective, comprehensive, cooperative and sustainable security in the Middle East.”

On March 28, Wang, while on a diplomatic visit to Iran, said about his five-point Mideast plan that it is to call Middle East countries to carry forward the spirit of independence and get rid of the interference of geopolitical competition. While there, Wang and Iranian Foreign Minister Mohammad Javad Zarif discussed the signing of the China-Iran comprehensive cooperation agreement March 27 between Iran and China, which contains a massive development package. Zarif praised China as a friend in hard times