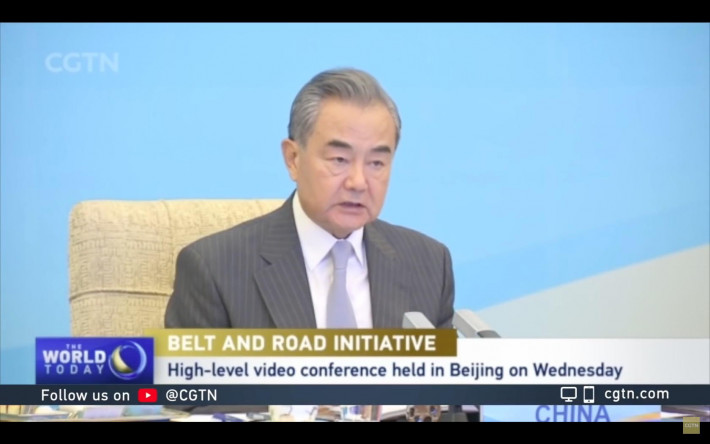 June 24, 2021 (EIRNS)–On June 23, State Councilor and Foreign Minister Wang Yi hosted a high-level video conference on international cooperation in the Belt and Road Asia-Pacific region. The theme of the conference was “Strengthening Anti-epidemic Cooperation and Promoting Economic Recovery.” The participants included Colombian President Duque and deputy prime ministers, foreign ministers, and other political leaders from 29 other countries, as well as the UN Deputy Secretary-General and UN ESCAP Secretary-General Ali Shahba.

President Xi sent a letter to the participants, in which he underlined the successes of the BRI and the importance of its work in dealing with the COVID epidemic. He said that China was creating a new development paradigm which, through the interconnectivity of the BRI, would help create more market opportunities, investment opportunities, and growth opportunities for BRI partners.

Minister Wang underlined the many successes of the Belt and Road in bringing development to the Asia-Pacific region. He noted that 140 partners have signed BRI cooperation documents with China. Cumulative trade between China and its BRI partners has exceeded 9.2 trillion U.S. dollars, and the cumulative direct investment of Chinese companies in countries along the route has exceeded 130 billion U.S. dollars. “The ‘Belt and Road’ has truly become the world’s widest and largest international cooperation platform,” Wang said. He also noted that there were no political conditions or ideological bias attached to Belt and Road membership, making a clear distinction between BRI and the Biden/G7 “Build Back Better World” boondoggle.

The meeting reached agreement on a 6-point program. The Members positively praised the progress of BRI cooperation; called on the international community to work together to overcome the problems engendered by the pandemic; called for greater cooperation in the development of vaccines and making them available to the world as a whole; placed “green development” in a prominent position in BRI infrastructure development; supported greater cross-border movement of goods and people and the promotion of trade and investment liberalization; accelerated the implementation of the UN Sustainable Development Goals.