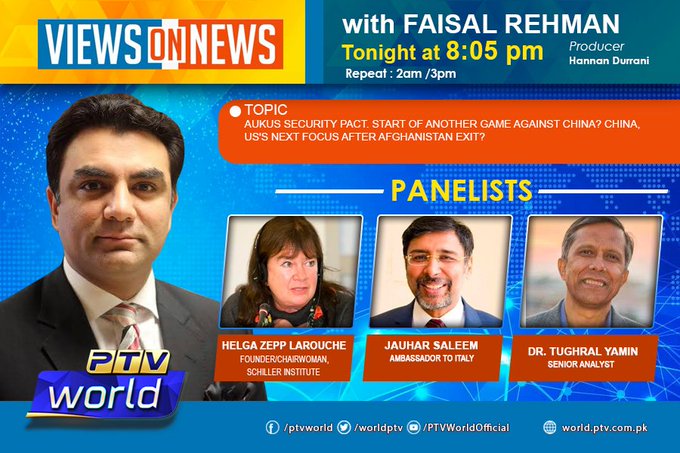 Sep. 20 (EIRNS)–On Pakistan’s “PTV World” broadcast, Faisal Rehman hosted Helga Zepp-LaRouche of the Schiller Institute and Pakistan’s Ambassador to Italy, Jauhar Saleem. Rehman began by welcoming “Our guest, Ms. Helga!” with an opening question as whether the world had entered into a clash of civilizations. Zepp-LaRouche answered that she had read Samuel Huntington’s Clash of Civilizations, and, first, it must be said that he knew very little about the civilizations that he wrote about.

Further, the world is not about “geopolitics but geo-economics” — employing the distinction recently made by Pakistani President Imran Khan. AUKUS is not the spirit of the time. The AUKUS attempt may even provoke something like de Gaulle’s response to NATO, as in 1958. This move has destroyed trust in Biden. He had just said, in pulling troops out of Afghanistan, that this was the end of an era; the end of useless wars. Was he serious? Or was it just to concentrate forces against China? This is not good for Biden, as trust in his word is undermined.

Rather, the New Silk Road is the pathway – and the Schiller Institute, by the way, has been on this pathway since 1991. So, does Australia want to be an aircraft carrier for this new military alliance? Or does it want an economic future for its own people? The situation is that there is a decaying neo-liberal system, and it has been refusing to respond to offers from China and Russia.

After a question and some discussion with Ambassador Saleem, Rehman turned back to Zepp-LaRouche, and asked: How would the U.S. and China, given the present conflicting positions, move ahead? Zepp-LaRouche set out that, objectively, neither China nor Russia represent a threat. There have been many offers on demilitarization from Putin — including to Germany, when he spoke, in German, to the Bundestag. And China has lifted 850 million of their people out of poverty. The BRI is not a threat. They are offering to developing countries to conquer poverty.

We need to take a step back. It is a nuclear-armed world, and there is the threat of war by accident, war by miscalculation. China’s Global Times clearly warned that China will fight and win certain conflicts, such as Taiwan. Therefore, we must stop geopolitics. In Afghanistan, David Beasley from the World Food Program made clear that 90% are hungry. Afghanistan’s Health Minister Majrood explained that 90% have recently been denied health care. The recent move to use the Extended Troika (of China, Pakistan, Russia and the United States) involves reaching out and collaborating to develop Afghanistan. It can be integrated into the BRI — and there is the offer to Europe and the US to join in. Pino Arlacchi, e.g, was able to conclude an agreement in 2000 with the Taliban on opium production.

There are presently two billion people in the world without access to clean water. We need a modern health sector in every country. Not doing so simply means that there will be more mutations, new variants and the defeat of the last round of vaccines. Clearly, this crisis requires a new paradigm. Afghanistan can be the new building block. The human species is the only one endowed with creative reason. We can find cures for a pandemic, for overcoming poverty, even colonizing Mars. You know, in February, the United Arab Emirates, China and the United States all had Mars missions at the same time. It is time to become an adult species.