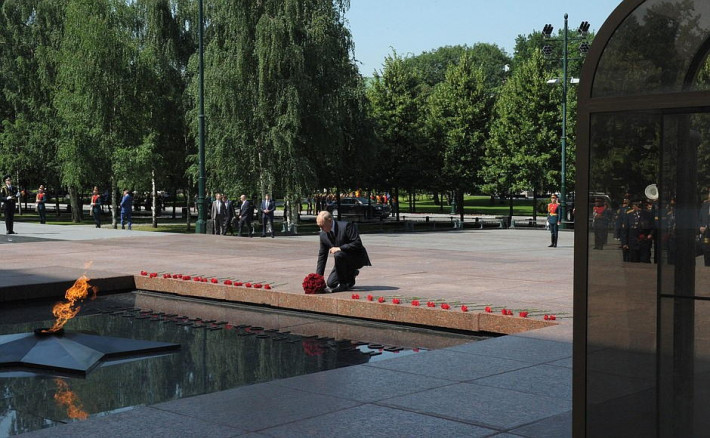 June 22, 2021 (EIRNS) — Today is the “Day of Remembrance and Sorrow” in Russia, commemorating the 80th anniversary of the June 22, 1941, with the Nazi invasion of the Soviet Union beginning the Great Patriotic War. On this occasion, Russian President Vladimir Putin has written a feature for the German weekly newspaper Die Zeit, titled “Being Open, Despite the Past,” also made available in Russian, English, and other languages. He recalls the enormous sacrifices made by the Soviet people in the fight against Nazism, whose memory is seared into their consciousness, and explaining the current security situation in Europe, he demonstrates that the Western-orchestrated geopolitical machinations of the past 75 years have created dangerous strategic tensions and heightened potential for conflict. But, he argues, however important it is important to understand  the past, “we simply cannot afford to carry the burden of past misunderstandings, hard feelings, conflicts and mistakes,” as these will “prevent us from concentrating on the challenges at hand. We are convinced that we all should recognize these mistakes and correct them.”

Putin described the hopes that Russia held at the end of the Cold War, that there would be a “common victory for Europe … the logic of building a Greater Europe united by common values and interests.” Instead, he points out, “a different approach has prevailed,” based on NATO’s eastward expansion, leaving nations confronted with the “artificial choice of being either with the collective West or with Russia. In fact, it was an ultimatum.”

As a result of these events in the post-war period, Putin wrote, “the whole system of European security has now degraded significantly. Tensions are rising and the risks of a new arms race are becoming real. We are missing out on the tremendous opportunities that cooperation offers–all the more important now that we are all facing common challenges, such as the pandemic and its dire social and economic consequences.” The “entire post-war history of Greater Europe, confirms that prosperity and security of our common continent is only possible through the joint efforts of all countries, including Russia.… We are open to honest and constructive interaction. This is confirmed by our idea of a common space of cooperation and security from the Atlantic to the Pacific Ocean which would comprise various integration formats.” Watch the event.