Putin Speech at Davos: The 1930s Led to World War; Will Conflict Be Avoided Today? 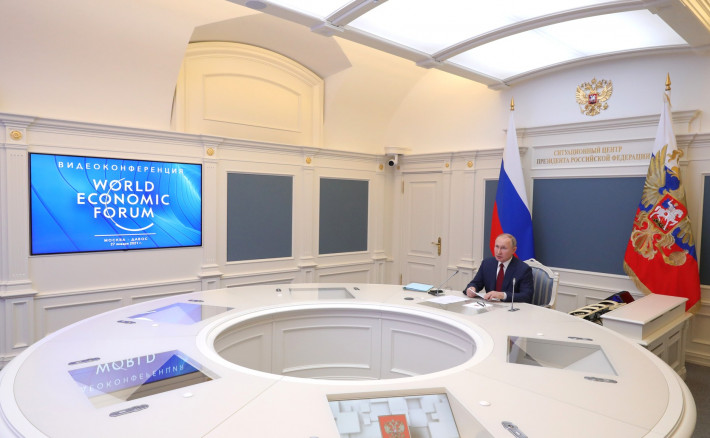 Putin Speech at Davos: The 1930s Led to World War; Will Conflict Be Avoided Today?

“There are no direct parallels in history” for the present time, said Russian President Vladimir Putin in his speech at the Davos Agenda forum. “However, some experts … compare the current situation to the 1930s…. As you are aware, the inability and unwillingness to find substantive solutions to problems like this in the 20th century led to the World War II catastrophe. Of course, such a heated global conflict is impossible in principle, I hope. That is what I am pinning my hopes on, because this would be the end of humanity. However, as I have said, the situation could take an unexpected and uncontrollable turn— unless we do something to prevent this. There is a chance that we will face a formidable break-down in global development, which will be fraught with a war of all against all and attempts to deal with contradictions through the appointment of internal and external enemies and the destruction of not only traditional values such as the family … but fundamental freedoms….

“We have a shared responsibility to prevent this scenario, which looks like a grim dystopia, and to ensure instead that our development takes a different trajectory— positive, harmonious and creative,” continued Putin, who then identified three great challenges confronting the international community:

First, while the past decades have brought great improvements in living standards overall, the gains have largely been concentrated in a small number of people. Using a $5.50 per day income figure, he boasted that China reduced from 1.1 billion to 300 million the number of people below that poverty line, Russia from 64 million to 5 million, while the U.S. number increased from 2000 to 2016 from 3.6 million to 5.6 million. “But … in terms of corporate profits, who got hold of the revenue? The answer is clear: 1% of the population.” He addressed the economic malaise that has struck the “developed” countries with the past decades’ shift to financialization and environmentalism: “In the past 30 years, in a number of developed countries, the real incomes of over half of the citizens have been stagnating, not growing. Meanwhile, the cost of education and healthcare services has gone up. Do you know by how much? Three times.” The source of this imbalance? They “are a direct result of the policy pursued in the 1980s … the Washington Consensus.”

The tools of some decades ago— stimulating consumption— can no longer work in a world where debt is double GDP globally and more than triple GDP in some countries, while interest rates are essentially zero and already at historic lows in many emerging market economies: “The so-called quantitative easing is only increasing the bubble of the value of financial assets and deepening the social divide.” The effect? “The rise of economic problems and inequality is splitting society, triggering social, racial and ethnic intolerance.”

Second, Putin took on the looming question of the tech giants. “In some areas, they are de facto competing with states,” he said. “Their audiences consist of billions of users that pass a considerable part of their lives in these ecosystems.”

“Society is wondering whether such monopolism meets public interests,” he asked, remarking that these tech giants should “replace legal democratic institutions and essentially usurp or restrict the natural right of people to decide for themselves how to live, what to choose, and what position to express freely…. I am confident that the overwhelming majority of people share this position.”

Third was the issue of international relations. Due to troubles at home, governments resort increasingly to enemy images, both domestically and abroad, with increasingly aggressive actions such as sanctions, trade wars, and restrictions. “Such a game with no rules critically increases the risk of unilateral use of military force.”

To resolve the reasons for unstable global growth, Putin warns “It is clear that the world cannot continue creating an economy that will only benefit a million people, or even the golden billion…. The recent developments, including migration crises, have reaffirmed this once again.”

“The reality is such that really different development centers with their distinctive models, political systems and public institutions have taken shape in the world. Today, it is very important to create mechanisms for harmonizing their interests to prevent … anarchy and a series of protracted conflicts,” Putin told his audience. Pointing to examples, he spoke of the Astana format of talks between Russia, Iran and Turkey to stabilize Syria; the end of bloodshed in Azerbaijan and Armenia with Russian intervention; and Russia-Saudi-U.S. cooperation on energy markets. Such cooperation is needed to support nations requiring help in achieving their testing and vaccination needs.

Putin gave short shrift— just a few sentences— to the green theme of the conference, a theme against whose implementation he had essentially spent his speech inveighing.

Responding to a question from forum organizer Klaus Schwab, Putin said that Europe and Russia, if they are able to rise above problems “inherited from past centuries” and look to the future, “we will certainly enjoy a positive stage in our relations.”

“We are ready for this, we want this, and we will strive to make it happen,” he concluded. “But love is impossible if it is declared only by one side. It must be mutual.”

The complete text of his speech is posted on the Kremlin website.