The Message Which López Obrador Should Take to Trump: A World Summit of Nations Is Urgently Needed to Address the Crisis 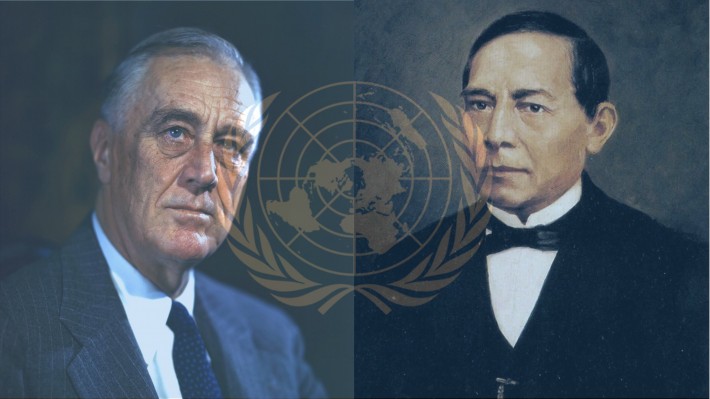 The Message Which López Obrador Should Take to Trump: A World Summit of Nations Is Urgently Needed to Address the Crisis

Statement by the LaRouche Citizens’ Movement of Mexico

July 3 — The opportunity has arrived. On the eve of the upcoming July 8 meeting between the Presidents of the United States and Mexico, Donald Trump and Andrés Manuel López Obrador, a number of international statements and developments have occurred which highlight the world importance of that meeting, in particular because of the role that Mexico will play as a non-permanent member of the United Nations Security Council, starting on Jan. 1, 2021.

At the beginning of 2020, Russian President Vladimir Putin proposed that a summit be held of the five permanent members (P-5) of the U.N. Security Council (Russia, China, United States, France and the United Kingdom) to address the grave crises which the entire planet is facing, and which require immediate joint action. These urgent crises include:

* The collapse of the physical economy and the total bankruptcy of the Wall Street and City of London speculative financial system, a collapse worsened – but not caused – by the pandemic.

* The need to create a new international security architecture, in order to prevent a Third World War from being unleashed. The recent article by President Putin on the subject of the origins of the Second World War is an important contribution in that regard.

Such a summit must be held as soon as possible, based on the same approach that the great American President Franklin Delano Roosevelt (FDR) set forth in his New Deal and Good Neighbor policies.

That is the central message which President López Obrador should communicate to his counterpart President Trump at their upcoming meeting.

Both Presidents, whose presidencies share a common origin — which is that their respective populations were fed up with the old system of looting –, also share a background of fighting to make their campaign promises a reality. But they have also been bogged down by the burden of ferocious attacks coming from a deafening campaign by the media and certain political circles to prevent them from taking any action. On the eve of their meeting, a new wave of collective hysteria has launched protests, which are being joined by congressmen and governors on both sides of our common border, demanding that the upcoming presidential meeting be cancelled.

It is not hard to imagine the fear of political and media circles tied to the current bankrupt system, at the prospect that the two presidents might reach agreements regarding the benefits that would come from joining their efforts to the call issued by the Presidents of Russia and China, Vladimir Putin and Xi Jinping
respectively, to govern relations between nations on a new basis, such as the kind of approach taken by the U.S. President Franklin D. Roosevelt during his long terms of office.

Recently, even British Prime Minister Boris Johnson stated on June 30 that he will orient his government along the lines of FDR’s New Deal policies. “It sounds like a New Deal, and all I can say is, that if so, then that is how it is meant to sound and to be, because that is what the times demand — a government that is powerful and determined and that puts its arms around people at a time of crisis.”

In response to that statement, Schiller Institute founder and President Helga Zepp-LaRouche stated:

“If, however, Boris Johnson would be serious about it [the New Deal approach], and he would immediately agree to participate in the summit called by Putin, and would insist that the New Deal in the tradition of Franklin D. Roosevelt is being made the subject of such a P5 summit, then it could be taken seriously and would actually be a useful contribution.”

Why we emphasize Roosevelt

Russian President Putin has called for a new, global security architecture, such as in his famous 2007 speech at the Munich Security Conference, shaped around FDR’s approach: “It is well known that the field of international security goes well beyond issues of military and political stability. It involves the stability of the world economy, overcoming poverty, economic security, and the development of a dialogue among civilizations. This all-encompassing, indivisible character of security is expressed in its fundamental principle, that ‘the security of each is the security of all.’ As Franklin Roosevelt put it in the first days after the outbreak of the Second World War, ‘When peace has been broken anywhere, peace of all countries everywhere is in danger.’ These words remain topical today.”

As for Chinese President Xi Jinping, he told a Seattle business group during a visit to the U.S. in 2016: “In my younger years … I was interested in the life story and thinking of Washington, Abraham Lincoln, Franklin Roosevelt and other American statesmen.”

President Trump has also turned directly to FDR on numerous occasions, including in his victory speech the night of the 2016 election, stating: “The forgotten men and women of our country will be forgotten no longer.”

President López Obrador, throughout his campaigns, has emphasized the historical importance of FDR. In mid June, he instructed Juan Ramón de la Fuente, Mexico’s representative before the United Nations, where Mexico was elected to serve as a non-permanent member of the Securtiy Council, to promote “the fulfillment of the four fundamental freedoms proclaimed by President Roosevelt,” freedom of speech, freedom of religion, freedom from fear, and freedom from want.”

López Obrador also state that, in terms of sustainable development, “the rich nations and international financial institutions [should] support poor peoples and governments in combatting hunger, epidemics, avoiding racism, classism, sexism, xenophobia and discrimination; help with investments and regional development programs so that no one, no human being on this Earth is forced to emigrate from the place of their birth due to a lack of opportunity to work or because of violence.”

Finally, he said the Security Council must be guided by the principle of Mexico’s great President Benito Juárez, that “among individuals as among nations, respect for the rights of others is peace.” López Obrador said that “in no conflict shall force be used and in no case shall the hegemonic force of the powers be imposed.”

For these reasons, we issue this call for President López Obrador to be the messenger of peace and take President Trump a message of unity, so that a world summit be carried out under the guidelines set forth by Roosevelt, whether that be under the aegis of a Four Power Summit (Russia, China, the U.S. and India) as Lyndon LaRouche repeatedly proposed, or one initiated by the P-5, as Putin has called for – so long as the summit’s mission is to construct a new paradigm of world peace based on universal economic development, and that the summit be only the beginning of an international association open to all nations on the planet.

We believe that only an institutional force on such a scale as this can lead the world away from the current social and health crisis, which stems from the pandemic and the economic collapse, and orient the path of nations towards a new paradigm of general welfare for all.