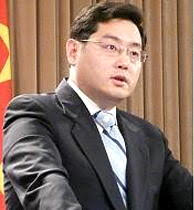 Sep. 1 (EIRNS)–China’s Ambassador to the United States, Qin Gang, held a Zoom discussion on August 31 with the board of directors of the National Council on U.S.-China Relations and other China-watchers, including Henry Kissinger and Susan Thornton, an Assistant Secretary of State for Asia under Trump. He said that U.S.- China relations were at “an historical juncture.”

“The extreme China policy of the previous US administration has caused serious damage to our relations, and such a situation has not changed. It is even continuing,” he said . He said that the United States should not treat China as a rival or push the situation toward a “Cold War.” “China is not the Soviet Union,” Qin said. “Some people in the US believe that America needs to deal with China from a position of strength. They think America can win the new `Cold War’ against China, just as it defeated the Soviet Union. This reflects a serious ignorance of history and China. China is not the Soviet Union. China has learned from this part of history that hegemonism will only lead to decline. Under the leadership of the CPC, China’s socialist democracy keeps improving. The people are the master of their own country. The nation enjoys economic development, social stability and better livelihoods for the people,” Qin said.

He stressed that both countries had benefited from their relationship over the last 50 years and within the U.S. business community there is a great deal of interest in being involved in the Chinese economy. China is not intent on surpassing the United States, he said, it is only interested in surpassing itself. And its goal is to create a better future for the people of China. Trying to paint China as an enemy, he said, is like Don Quixote jousting with the windmills. He said that it would be a big mistake to think of “decoupling” from China. He noted that when the Soviet advisers withdrew from China in 1960, it caused great problems, but China survived. And in the attempt to take down Huawei, he said that many Chinese believe that it will only lead to many more Huaweis.

The two sides should observe each other’s “red lines” and use the opportunity of cooperation on issues like COVID and climate change in order to find further areas of cooperation. “At the same time, we need to jointly remove obstacles for cooperation. It is hoped that the U.S. will stop political manipulation on the origins tracing of the virus and stop deliberating and passing China-related bills that will seriously hijack China-U.S. relations” he said. He concluded his remarks by appealing to his American interlocutors, “The historical mission of upholding and promoting our relationship in the new era has come to us.” Let’s hope they take that to heart.