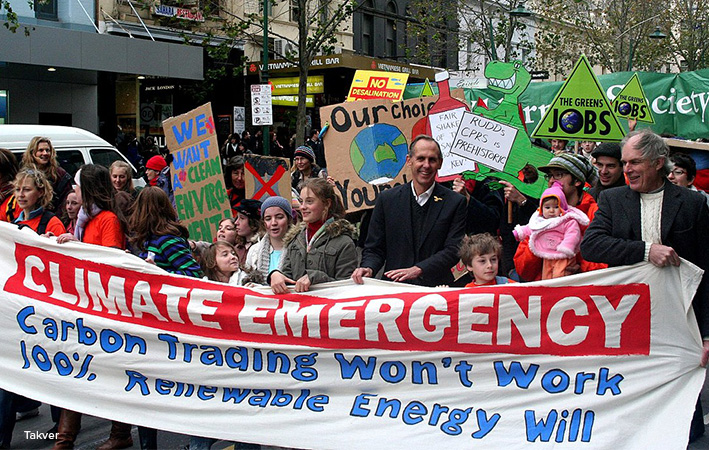 As the storm signals of the impending financial crisis become more alarming, we are witnessing what is probably the largest social engineering experiment that has ever taken place. The aim of this trans-Atlantic campaign is to make the population—with the help of orchestrated climate hysteria (“We only have 18 months left!”)—voluntarily accept a collapse of its standard of living while directing all investments into “green” projects.

At the same time, the “Great Transformation of the World Economy” is supposed to give “green” investors huge profits and—together with the miraculous increase in money supply via endless “Quantitative Easing”—postpone the collapse of the hopelessly bankrupt financial system once again.

Sixteen-year-old climate star Greta Thunberg, the FridaysForFuture (F4F) student movement, and the Extinction Rebellion (XR) are being strategically exploited by the neoliberal financial oligarchy through a whole complex of institutions and organizations—including investment bankers, consulting firms, the Tavistock Institute, entire battalions of psychologists and behavioral therapists, the World Bank, the European Union (EU), and several billionaires, as well as internet platforms and veterans of the population reduction lobby.

It uses the whole gamut—from panic-stricken children to “Green New Deal”-advocating “internet personalities,” to groups that are also willing to cross the boundaries from civil resistance to more violent forms—to enforce the demands of the Paris Climate Agreement well before the agreed-upon date of 2050. It includes all the green cadres, from Al Gore’s Climate Reality Project to the internet platform wedonthavetime.org, “We don’t have time,” on whose advisory board sits, among others, Greta Thunberg.

German Chancellor Angela Merkel who, along with Federal President Frank-Walter Steinmeier, had previously praised the F4F movement, commented in her summer press conference that Thunberg’s demonstrations had certainly accelerated the government’s decision-making process toward implementing efficient measures to reduce CO₂ emissions. The German “Climate Cabinet” will announce a whole series of measures on September 20, among which the determination of a “carbon price” will be of central importance. Whoever “pollutes” the atmosphere with carbon dioxide will have to pay a price in the future.

Thus, Mrs. Merkel has finally joined the camp of the ideological climate lobby that wants to “nudge” the population, via an increase in prices for energy and transport, to change its behavior. In practical terms, this will mean that a majority of people will no longer be able to afford to use cars or planes, or have adequate heating or power supply.

It means a bonanza for investors, on the other hand, should this measure become policy. This point was made at a June 7 event on “Sustainable Financing” at the House of Finance in Frankfurt by Dr. Christian Thimann, Chairman of the Executive Board of Athene Deutschland Holding, a subsidiary of the insurance company Athora and a long-time employee of the IMF and European Central Bank.

Often one strives unsuccessfully for years for something, and then suddenly something surprising happens, which changes everything. For example, the topics of the “limits to growth” of the Club of Rome, and climate protection, have been under discussion for decades, but only after the notable phrase, “The climate goals will only be achieved if we direct the capital flows into sectors with low emissions,” was formulated in the Paris Climate Agreement, did the climate for the financial sector change completely. Suddenly the issue of “sustainable investment” became central to the economy; suddenly twelve million young people took to the streets, and suddenly this became a “big thing.”

The EU is working on guidelines on emissions trading and climate protection, and legislation that is designed to make these guidelines binding for investment in green technology. For an industrialized nation like Germany, but also for the whole of Europe, this is nothing less than a pre-programmed course for economic suicide.

For what neither the EU bureaucrats nor the sharks of the financial sector understand, are the principles upon which the real, physical economy is built: There is a direct correlation between the energy-flux density applied in the production process, the productivity of the economy, and the number of people whose lives can be supported through these parameters. A diversion of investments exclusively into so-called “sustainable” areas, e.g., “renewable” energy sources such as electricity generated by wind turbines and solar cells, as well as carbon emissions trading, and mandating that the transport, construction, and agriculture sectors must comply with climate regulations, in fact means devolution back to pre-industrial society. For Germany it effectively means the emigration of young workers, more of the aging population left without adequate care, and general impoverishment.

This “Great Transformation,” the complete decarbonization of the world economy, which has long been propagated by German climatologist Hans Joachim “John” Schellnhuber, CBE, is all the more criminal, because the alleged scientific consensus on the thesis of anthropogenic climate change is a fiction. There are many declarations worldwide that have been signed by thousands of scientists, including the late Frederick Seitz, the former president of the U.S. National Academy of Sciences; scientists and scholars associated with the Nongovernmental International Panel on Climate Change (NIPCC); and hundreds of Italian, Scandinavian, and Japanese scientists addressing this very problem.

Contested by all these experts, is the claim that the anthropogenic contribution to climate change plays any noteworthy role. They argue that the causes of changes in the Earth’s climate are, above all, natural fluctuations that have to do with processes on the Sun, cosmic radiation influences on cloud formation, the Solar system’s changing position in the Milky Way galaxy, and other cosmic phenomena.

They also stress that climate simulation models do not reflect the actual climatic fluctuations of the past 10,000 years, and that nature—not man—determines the climate. As the recent petition by the Committee of Italian Scientists led by the renowned Professor Uberto Crescenti highlights, it is therefore illusory to suggest that a reduction in carbon dioxide emissions could control the climate.

However, Christoph M. Schmidt, the chairman of the so-called economic “Five Wise Men” of Germany, the top advisory body of the German government, did not refrain from praising the F4F movement at its Congress in Dortmund, for allegedly making it clear to the public that present policies cannot continue. Schmidt also fully supported an increase in the CO₂ emission allowance price as a “basic tool” in the fight against climate change. His appearance in Dortmund and his statement are equally scandalous in view of the consequences of this policy and raise the question of whether he should resign because of incompetence, or because of profiteering.

Banks and Foundations in the Climate Line-Up

In the financial markets, initiatives are popping up such as the Climate Bond Initiative, which seeks to turn the $100 trillion global bond market into a giant new platform for investing in sustainable economic activity of all kinds. (The EU has so far provided “only” $360 billion.) Participants in this initiative include the Rockefeller Foundation, Bank of America, HSBC, the Inter-American Development Bank, Bloomberg Philanthropies, the government of Switzerland, the British Foreign and Commonwealth Office, the Frederick Mulder Foundation, OAK Foundation, Gordon and Betty Moore Foundation, FSD Africa, NAB (Australia), European Climate Foundation, the Sainsbury Family Charitable Trust, the EU’s Horizon 2020 Program, Climate Works Foundation, UNDP, Climate KIC, KR Foundation, and Martin International. Equally active are the World Economic Forum, the Bill and Melinda Gates Foundation, the United Nations Framework Convention on Climate Change (UNFCCC), The Economist magazine, and the Green Climate Fund, to name but a few.

Ironically, it is clear to Greta Thunberg herself that wealthy interests are involved in the controversy. In a speech to schoolchildren in Katowice, Poland, she said:

“I do not care about being known. My concern is climate justice and a livable planet. Our civilization is being sacrificed for the opportunities of a small group of people who want to make more and more money.”

However, exactly these sentences were deleted in the publication of this speech by the Internet platform Avaaz. Avaaz, a product of the George Soros-related MoveOn.org platform, specializes in collecting personal information on every conceivable topic by organizing petitions around the world.

Will the Real Economy Survive?

This is precisely the point: At a time when the real economy in Europe and the United States is crumbling and the next collapse of the financial system can be delayed only by a new flood of liquidity, a new gold rush for green investment is being generated, which perhaps may enable speculators to make a large amount of money for a short time. The effect on the developing countries will be catastrophic, the non-affluent part of the population in our country will be clobbered, and after a super-short boom in the monetary area, Germany will be destroyed as an industrial location.

It is high time to pull the emergency brake. But who will do this if the EU and the Berlin government are part of the problem, and the Greens obviously represent the same thing, only colored in green? It can only come from the parts of society that are the victims of that policy: the middle class, the productive part of the working population, parents, teachers and all thinking people.

We urgently need a public debate on these issues. Germany is currently driving at full speed off the cliff!