In the Face of the Refugee Crisis: Realizing a Grand Vision

The escalating refugee crisis has split Germany into two fundamentally opposed camps: the majority (as of now) of people who respond as good Samaritans to the distress of the refugees, and actively help in one way or another to alleviate some of this distress. With her statement “We will do it!”, Chancellor Merkel expressed the attitude of that majority.

Then there’s the other side, which ranges from Christian Social Union head Horst Seehofer, to Interior Minister Thomas de Maizière, to Schäble’s son-in-law Thomas Strobl, Bavarian Finance Minister Markus Söder, the Alternative for Germany Party, and the xenophobic Pegida movement.[1] Their common denominator is stoking the fear and resentment of the population and offering proposed “solutions” which ultimately violate human rights, in some cases marked by open racism, all of which share one thing—total inadequacy for solving the problem.

The political climate between these two camps has now become so hot, aggravated by an objective overload on the municipalities and inadequate housing capacities for the refugees, that the situation in Germany is about to become uncontrollable. If it should come to that, this crisis would have fateful consequences for all of Europe, due to the relative weight of Germany on the continent. 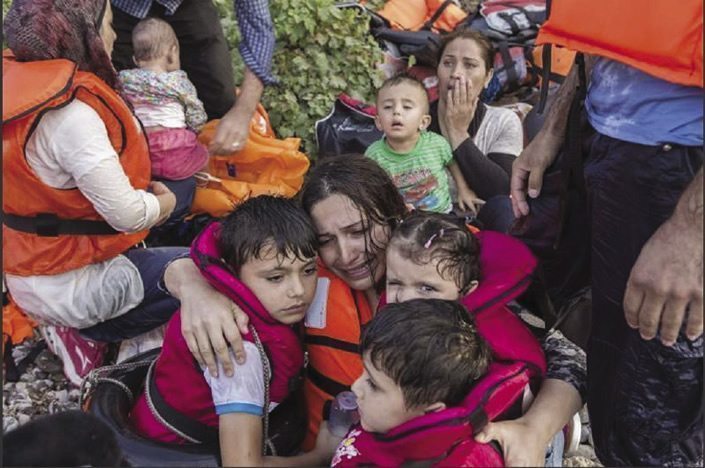 A Syrian woman and her children, among the lucky ones who made it to the Greek island of Lesbos after crossing the Aegean Sea from Turkey (UNCHR)

This is not a crisis whose end is in sight; on the contrary, on an almost daily basis, streams of incriminating pictures come out of bodies of refugees washed up on the Mediterranean coast, among them babies and small children, a mirror-image of the failed EU policy, which has ignored the looming catastrophe for years, and left primarily Greece and Italy to handle it alone. Officially, 2,600 people have drowned this year alone; the number of unreported cases must be much higher. But it’s not only desperate Syrians who are risking their lives in the attempt to escape death; millions of people in Afghanistan, Iraq, Yemen, Libya, and many more African countries, or in refugee camps in countries such as in Turkey, see no future, and set off for Europe.

There are some, who, like Frontex director Fabrice Leggeri[2], are demanding that deportation prisons (or jails) be established in the so-called hotspots of Italy and Greece, in order to prevent the refugees from entering EU territory through its external borders. Others want to deploy Frontex-ships against the traffickers—which obviously puts the lives of the refugees in great danger.

Striking the same tone are proposals like those of Markus Söder to change the Constitution in order to restrict the right of asylum to specific quotas—a clear violation of the Geneva Convention. Human rights organizations also consider the new asylum proposals by Interior Minister de Maizière to be unconstitutional and totally inappropriate for solving the problems in managing the refugee crisis, not least because they increase the panic among the refugees at having Europe’s gates shut on them.

It is dawning on some that this refugee migration is in reality a mass migration comparable to the great migrations of late antiquity. They are the result of a decades-long failed policy of the geopolitical wars of Bush and Obama in Southwest Asia, which were based on lies; and of the conditionalities policy of the IMF, which suppressed economic development and created the breeding ground for terrorism through the resulting poverty.

The idea that you could remedy this situation which is totally coming apart at the seams, by building a new Limes Wall around Europe, and declaring the Near East and Africa terra incognita,—as is proposed in the 1991 essay by Jean-Christophe Rufin “The Empire and the new Barbarians: North-South Rupture,”—is absurd, and ultimately reflects the moral and political bankruptcy of its advocates. Should pictures of terrorized refugee children shown between NATO barbed wire and tear gas, who are the victims of a failed policy,—should shot refugees and drowned bodies become the “new normal?”

With reference to the xenophobic Pegida demonstrations and the burning refugee shelters, Die Welt wrote that Mrs. Merkel could only survive the next two years if she gets the refugee problem under control. A fair assessment, and even more so in view of the fact that the trans-Atlantic financial system can implode at any minute, and the gigantic derivatives bubble evaporate in a super-crash, as, among other things, the Glencore crisis calls to mind. It should be clear to any thinking human being that the chaos which would result from such a crash, would destroy the foundations of society, and scuttle all calculations on the refugee question.

There is a way out—but it requires a totally new paradigm and a totally new way of thinking. Only if the military operation by Russia, and now China, in Syria, and possibly Iraq, is followed by a comprehensive economic reconstruction program, that actually develops the Southwest Asian region which has been bombed back into the Stone Age, and permits people there to have the future which they don’t have now, can the mass migration be stopped. The same goes for Africa. 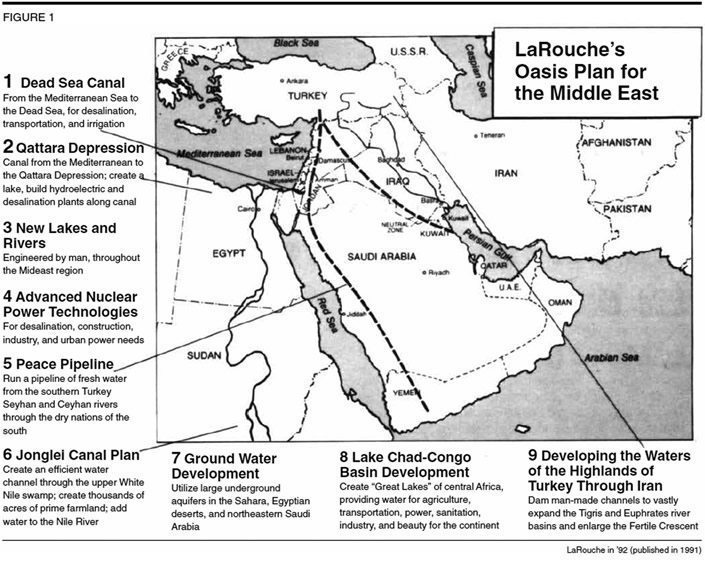 Prior to the escalating wars and terrorist onslaught in the region, these projects proposed by Lyndon LaRouche were all under discussion

The basic idea is to develop the whole of Southwest Asia with a comprehensive development program; the greening of the deserts with desalination of large amounts of sea water, and other modern methods of fresh water production, such as ionization of the moisture in the atmosphere, together with the building of integrated infrastructure projects, industry and agriculture, and new cities will totally change the characteristics of the region.

Only if poverty is eliminated, and, most important, young people, and especially young men, are given a real perspective for the future, can the problem of terrorism be overcome. Naturally, the known sources of funding this terrorism—for example, through drug cultivation in Afhganistan and certain Wahhabi “charity” organizations, must be cut off.

It is clear that such a change in paradigm is only feasible if all the major neighbors of the region—Russia, China, India, Iran, Egypt, and the European nations—and hopefully also the United States—work together. To stop mass migration from Southwest Asia and Africa, geopolitics must be shelved, and replaced by the common aims of mankind. Among these aims is victory over terrorism, which threatens Europe, as well as Russia, China, India, and the United States,—and the need to preventing the refugee crisis from shattering the foundations of European society.

In addition to adopting a development perspective, the problem of the integration of those refugees already in Europe must immediately be addressed. In Germany today there are about 45 million employable persons; in 2050 that figure will only be 29 million, and in many other countries the situation is similar. The integration of such a new workforce is therefore in our own fundamental interest.

Why should the young employable refugees not be involved immediately in the construction of a half million units of subsidized housing? The financing could be undertaken by the Reconstruction Finance Bank (Kreditanstalt für Wiederaufbau) just as it financed the German economic miracle after the Second World War, and it would have the same economic effect. The mere announcement of this project, in combination with an extension of the New Silk Road toward Southwest Asia and Africa, would eradicate the current despair and anxiety for the future, and give way to a spirit of optimism.

The mean-spirited skeptics should ask themselves the question: do they really believe that the current policy toward the Middle East and Africa can actually go on forever? On the positive side: With China’s policy of the New Silk Road and President Xi Jinping’s offer of “win-win” cooperation for building the New Silk Road, we already have the framework in place for the perspective outlined here. The fact that the report “The New Silk Road Becomes the World Land-Bridge” has just been published in Chinese translation, and at the book launch received the enthusiastic support of ten representatives of leading Chinese economic institutes, demonstrates that this perspective presents a realistic opportunity, for which cooperation from Russia, China, and India can be relied upon, to resolve the refugee crisis in a totally new way. That opportunity need only be seized.

[1]. PEGIDA stands for Patriotic European Against the Islamicization of the Occident. The movement was founded in Dresden, Germany and has been holding anti-Islam demonstrations since October 2014.

[2]. Frontex is the European Agency for the Management of Operational Cooperation at the External Borders of the Member States of the European Union. It was established in October 2004.