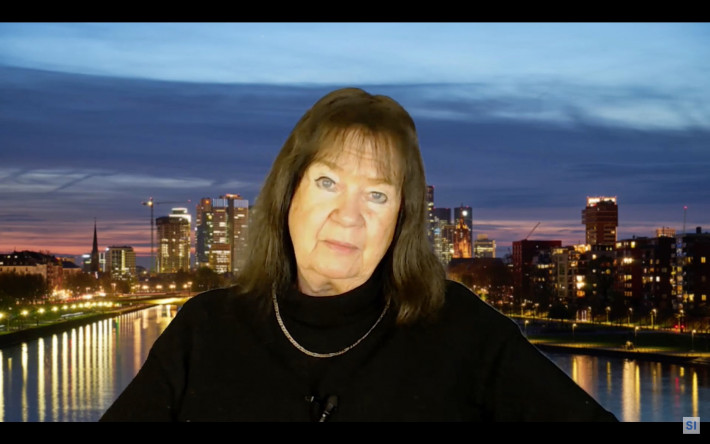 May 9 (EIRNS)—“It seems to me that if mankind is going to survive or not as a species, are we going to go extinct or not, really depends on whether we can overcome being victimized by imperial thinking—divide and conquer—and letting ourselves be in this camp, hostile to the other camp. Or, can we somehow evoke in ourselves and in others this quality of the inner self-development in cohesion with the lawfulness of the creation of the universe?

“It seems to me that this is a method which absolutely must be applied now. I think that on the question of somehow overcoming this geopolitical confrontation, or especially the divisions of identity politics which are increasing divisions by the day—we have to somehow find this inner mechanism, this inner idea which makes us all human belonging to the one human species. Given the pandemic, and the fact that we are really in an unbelievable crisis—a moral crisis, a political, medical, military crisis, an economic crisis, a financial crisis—that we have to start somewhere where we address this question of what makes us all human, and that is the sacredness of every human life on this planet…. And I think we will be able to do that, because I think human beings have the potential to be human.”

With these words Helga Zepp-LaRouche opened the second panel of the Schiller Institute conference “The Moral Collapse of the Trans-Atlantic World Cries Out for a New Paradigm,” an event which brought together speakers from the United States, Europe, South America, Syria, Afghanistan, and Japan. Confronted with the deadly realities of the threat of nuclear war, of pandemic and famine, and of the neo-Malthusianism that has infected the minds of so many and stymies their acting against the very real threats to humanity as a whole.

Barbaric sanctions—murder conducted in the name of “human rights”— are a disgusting tool used to crush countries into submission. The Saudi blockade of Yemen, the U.S. extension of deadly sanctions on Syria—these are clear expressions. But what of the sanctions demanded by the likes of supposedly “progressive” people?

What of the Green demand that nations not develop, not utilize their resources, and not have growing populations?

Whether sanctions take the form of U.S. opposition to a government (think Syria, Russia, Iran), or the Great Reset’s opposition to an atmospheric gas (CO2), the effect of their implementation is to crush development and deprive people of their lives, livelihoods, and futures.

We must not be moral failures! A world in which an accident could result in the unleashing of a barrage of hundreds of nuclear missiles and thousands of warheads, absolutely devastating civilization is not a world that can be tolerated, nor one suitable to the inherent dignity of the human individual.

Share the Schiller Institute conference and rise to the level of thought and action the present demands and the future deserves.  (There is a brief 1 min. lag in start of the video.)