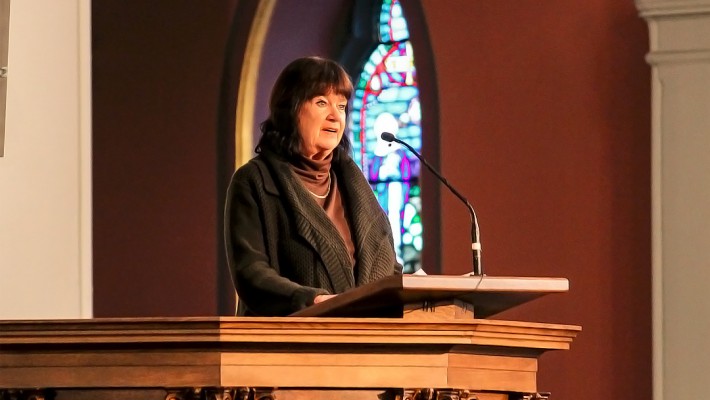 I think that if the average American knew how close we are to World War III, people would be out in the streets, and they would demand a change of the present policy of the Obama Administration.

The former Chief of the General Staff of the Russian Army, Gen. Yuri Baluyevskiy, a couple of days ago gave an interview in which he said that he believes the conflict between NATO and Russia is already underway, that it began with an information war, with a tremendous psychological campaign, pressuring the minds of the population, and that military force proper will only be the final phase of this. When he was asked if he thought it still could be stopped, he said, unfortunately, he believes that it is no longer possible; that the mechanism has been set into motion; that our adversaries’ aim has been clearly defined: They will try to prevent Russia from becoming their equal partner, militarily or economically.

At a recent conference in Slovakia, Prime Minister [robert] Fico said that he believes that the likelihood of a thermonuclear war, involving more countries than just Ukraine and Russia, is 70%.

Yesterday, there was a group of people in Germany, very important dignitaries, who issued an appeal to the German government and the German Parliament, with the headline “War Again in Europe? Not in Our Name!” [See EIR, Dec. 12, 2014] They outlined why they think the present course of policy is going to go to war with Russia in the short term, and they appealed to the German government and to the media to stop the disinformation campaign, the demonization of Russia and China. It was signed by former Chancellor Gerhard Schröder, by former President Roman Herzog, by the former head of the Munich Security Conference, Horst Teltschik, and many important people from industry, politics, the media, and the cultural world.

Now, that is very good, because we are right now on a confrontation with Russia in the short term, which can only mean the extinction of civilization.

All of this really started with the neo-con policy at the time of the collapse of the Soviet Union, when the neo-cons decided to create a world empire with the British, based on the model of the British Empire and based on the “special relationship” between Great Britain and the United States. And all the steps that have been taken since—the color revolutions against Ukraine and Georgia; the attempt to do so in many other countries in the world, to cause regime change among all countries which would not submit to this idea of the empire. The promise at the time of the German unification, not to expand the borders of NATO to the Russian border, was obviously broken.

The sanctions against Russia, as Foreign Minister [sergei] Lavrov recently said, are not really aimed to force Russia to change its policy, but to create such havoc economically in Russia, that the Russian population would turn against Putin and topple his government, and then go for the dismemberment of the Russian state.

This all is a situation which must not happen, because there is an alternative. What the mass media in the United States have completely blocked out, is the fact that since July of this year, since the summit of the BRICS countries in Fortaleza, Brazil, a completely new economic system is developing very, very fast. You have right now a situation where more than half of mankind—the BRICS countries, most Latin American countries, many Asian countries, even some African countries, like Egypt and South Africa—are on a road of a complete explosion of economic reconstruction, of development projects which had been prohibited by the IMF conditionalities for the last several decades.

Following the Fortaleza summit, for example, China is now helping Nicaragua to build in five years a second Panama Canal through Nicaragua, which is immediately creating 50,000 jobs; it will create two ports; a major transport line from one ocean to the next; a new city, a new international airport, and it will transform Nicaragua from a poor country into a very, very hopeful country of prosperity.

The same is happening in many Latin American countries: China is helping Brazil to build a transcontinental railroad from Brazil all the way to Peru. Many of these countries are cooperating in the building of new nuclear plants, between Russia and Argentina, China and Brazil, India and Russia, and many other combinations; and they’re also going on the path of absolutely fantastic space exploration.

Also these countries have created new financial institutions, which are only devoted to financing physical economy, development projects, and are devoted to the common good of the people. There is the Asian Infrastructure Investment Bank (AIIB) by China; there is the New Development Bank of the BRICS countries; the Shanghai Cooperation Organization is in the process of creating a new bank. Also the South Asian countries of the SAARC [South Asian Association for Regional Cooperation] states are creating a new bank. There is a new development fund for the Silk Road.

All of these projects will go in a very positive direction, to eliminate the poverty of these countries in only a few years. Since India’s new Prime Minister, Narendra Modi, came into office, there is an explosion of enthusiasm in India. He has announced that he will build 100 new cities, that he will create 1 million jobs per month; he is reviving 30 water-management projects which were put on hold after Indira Gandhi was assassinated. So there is an enthusiasm in India which you have no idea about!

The same is true for China: Don’t believe one word that you have heard about China! I was in China two times this year and I can assure you that the population is absolutely optimistic. They are convinced that the unbelievable Chinese economic miracle, which they were able to accomplish in only 30 years, will make an industrial revolution possible, which most countries of Europe, and the United States, needed 200 years to accomplish! And when President Xi Jinping announced the New Silk Road as the basis for a new world economic order, this meant simply that the Chinese government is offering now, that every country which wants to participate can repeat the same principles of this Chinese economic miracle in their own country.

I’m absolutely certain that the only way we can stop the escalation to World War III, is that we take up the offer of President Xi Jinping, which he made at the closure of the APEC summit, in a press conference together with President Obama, where he offered to Obama that the United States and other major countries should join the New Silk Road and these new financial institutions.

I have not heard Obama making any response that he would do so, but I’m absolutely certain that the countries of Europe, which are in rebellion against the war danger, are absolutely capable of joining with the BRICS countries for this global development.

We will only come out of this mortal danger to the existence of civilization if we get the United States to join this new paradigm which these countries are already living in. Do not believe the propaganda! China is based on Confucian ideas right now; India has revived the great spirit of Mahatma Gandhi and Jawaharlal Nehru; and that optimism is profound and it has been contagious for the populations of these countries. There is a completely different paradigm already working in these countries, which, together with the other Asian, African, and Latin American countries, after all, represent the majority of civilization.