Zepp-LaRouche Addresses a Forum at Largest Publishing House in China 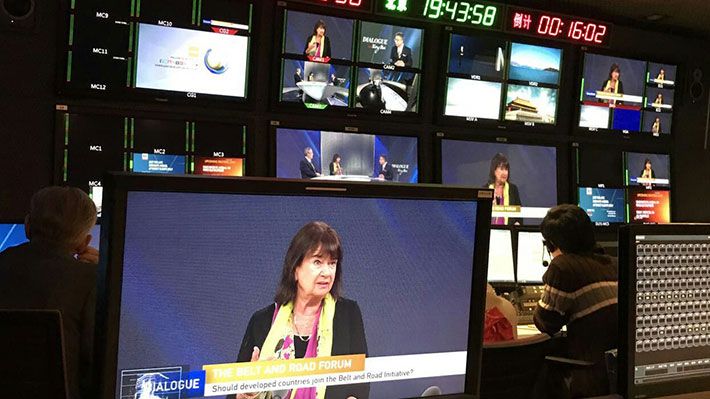 Zepp-LaRouche Addresses a Forum at Largest Publishing House in China

In a major address to an audience of between 100 and 200 people at the Phoenix Press Publishing Group at their headquarters in Nanjing, China, Helga Zepp-LaRouche, the president of the Schiller Institute, gave a report-back from her attendance at the Belt and Road Forum in Beijing.

“The Belt and Road has injected optimism into many countries,” Zepp-LaRouche said, “and the momentum is unstoppable,” but bringing it fully to fruition “will not be easy.” Immediately after the summit, she continued, the attacks against the Belt and Road escalated, combined with attacks against President Trump, who had sent a high-level delegation to the BRI Summit. “The attacks were based on the absurd charges of collusion with Russia in the election,” she said.

“After the Cold War, the British and their American allies wanted to create a unipolar world,” she said. “And in doing so they have destroyed the Middle East and left it in a shambles.” And this precipitated the refugee crisis, the general reaction against “globalization,” and the rise of right-wing movements. “The Belt and Road,” she said, “will bring about the creation of the World Land-Bridge, which will connect all continents. And this is something we have been fighting for, for over 40 years,” she said.

She then described the fight of her and her husband, Lyndon H. LaRouche, Jr., to build a new world economic order: LaRouche’s call for an International Development Bank, the fight for the African development plan, and the Ibero-American initiative in the same direction in collaboration with Mexican President Jose Lopez Portillo, and the hundreds of seminars on five continents held by the Schiller Institute calling for a Belt and Road development.

“Transforming the Belt and Road to a World Land-Bridge will realize politically for the first time a real future for all the people living on this planet and will establish forms of governance for the world.” But to fully realize this, she said, “you must also study the ideas of my husband on the question of economics.”

Zepp-LaRouche then went through the all-important cultural aspects of the Belt and Road and the need for all of the different cultures involved to bring out their finest achievements, in order to use these to create a dialogue of cultures among the nations on the Belt and Road. She then went through the importance of Friedrich Schiller in German and Western culture and the importance of Confucius in Chinese culture, making a concrete comparison of the works of Schiller and Confucius and showing the close similarity in the ideas of these two great thinkers which were separated in time by almost 2000 years .

Zepp-LaRouche was followed by Bill Jones, the Washington Bureau Chief of EIR, who showed a power point presentation describing the struggle of the LaRouche organization from the time of Nixon’s abandonment of the Bretton Woods system. He described the 1970s attack of the Club of Rome and the publication of “Limits to Growth,” which was intended to transform the culture of progress into the culture of death with the international push for Zero Economic Growth and Zero Population Growth. He outlined the reaction of Lyndon LaRouche and the LaRouche organization to the Zero Growth movement, LaRouche’s call for the International Development Bank (IDB), and the subsequent call for the IDB and a New World Economic Order at the Colombo meeting of the Non-Aligned Movement in 1976, and by Guyana’s Foreign Minister, Fred Wills, at the U.N. General Assembly.

Jones described the struggle waged by LaRouche to bring President Ronald Reagan, who had adopted LaRouche’s concept of the Strategic Defense Initiative (SDI) as a peace proposal with the Soviet Union, into a working relationship with the progressive leaders in the developing sector, such as Mexican President Lopez Portillo and Indian Prime Minister Indira Gandhi. These efforts then led to a reaction by the people around Vice President George H.W. Bush, who connived to have LaRouche and several of his associates incarcerated on trumped-up charge. The election of President William Clinton brought LaRouche out of prison and back into an advisory role, with President Clinton’s attempts, albeit unsuccessful, to move in the direction of a new financial architecture. The creation of the Belt and Road Initiative (BRI) and the Asian Infrastructure Investment Bank (AIIB) represent, therefore, the type of structures that LaRouche and his movement have been trying to bring about for over four decades, Jones explained.

This was followed by Professor Bao Shixiu, a professor of military science, who outlined the strategic importance of the Belt and Road for China, showing how it will allow the country to overcome the traditional difficulties it has had with other countries, including India and Japan. Professor Bao underlined the seminal role of the LaRouches in bringing this initiative to the forefront, and the ongoing struggle of Lyndon and Helga LaRouche to overcome the opposition to it from the London-New York financial elites. Professor Bao also laid out both the economic and strategic implications of the Belt and Road for China, which would help ensure a harmonious climate in the region and in the world, which would allow it and all other countries to continue to develop.

There was a great deal of interest exhibited by the audience, particularly in Helga Zepp-LaRouche’s call for the dialogue of cultures and a heightened degree of interest in the work of Friedrich Schiller among the Phoenix staff, some of whom seemed to have had a rather extensive exposure to the works of German culture.