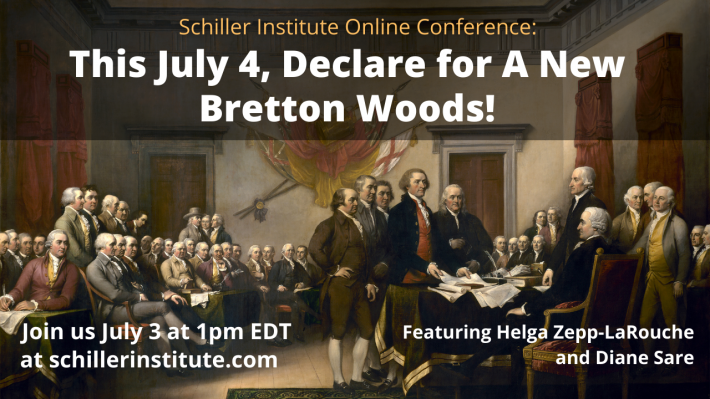 This July 4, Declare for A New Bretton Woods!!

Juni 28, 2022by Anastasia Battle in Allgemein

On Sunday, July 3, Helga Zepp-LaRouche will present the “Lyndon LaRouche New Bretton Woods” proposal as the core content of a new world development architecture, in a two-hour dialogue. [Joining her is Diane Sare, longtime associate of Lyndon LaRouche and an independent candidate for United States Senate.] Such a New Bretton Woods policy, and policy-discussion among all nations, provides the only sound basis for ending the perpetual wars of the past twenty-years’ post-9/11 era, and the policy blunders committed since NATO expansion accelerated after 1990

The much-vaunted Anglo-American post-1989 “unipolar world-order” is now no more. Its 30-year “rule of law” has devolved into perpetual war, self-destroying sanctions, deindustrialization, hyper-inflation and impending bankruptcies, mass death through pandemics, and mass cultural despair. Not only America, but Germany, the United Kingdom, France, Italy, indeed the entire trans-Atlantic group, are in more turmoil than at any other time in the past half-century.

In many respects, the United States and NATO have now come to resemble the very British Empire against which the Founders of the United States initially declared their independence. That’s why “NATO nations” need to throw off their 19th and 20th century geopolitical policies, and instead adopt a new approach to working together with the world as a whole, especially the continents of Africa, Asia and Ibero-America. Whatever our political differences, including disputes with Russia, China,or other perceived enemies, we must devise a solution that advances the General Welfare of all nations, and of our posterity.

On July 4, 1776, America declared independence from a despotic British Imperial system. Today, How could we rescue the original United States and its Declaration of Independence and Constitution from the clutches of Wall Street, the City of London, and the nearly-useless Republican and Democratic Parties? The New Bretton Woods idea, first discussed in a January 1988 conference in Andover, Mass. by Lyndon LaRouche, Helga Zepp-LaRouche and Dr Frederick Wills, former Minister of Foreign Affairs of Guyana, is a way of joining the United States together with other nations to fulfill the promises of presidents Franklin Delano Roosevelt and John F Kennedy of a just world economic order based on technological progress for the developing sector.

Here is the core of Zepp-LaRouche’s proposal.
“First: The reorganization of the bankrupt world financial system and replacing it with a New Bretton Woods system. The declared goal of this new credit system must be overcoming poverty and underdevelopment in the entire world, but above all raising living standards in developing countries, making it possible for all people on this planet to fully develop their potential capabilities.
Second: A bankruptcy reorganization of commercial banks, putting them under creditor protection, so that they can supply the real economy with credit. Investment banks and other financial entities must manage without taxpayer money, putting their accounts in order on their own, and declaring bankruptcy, if necessary.
Third: The banning of derivatives trade under agreements among governments.
Fourth: The immediate implementation of a system of fixed exchange rates, which can be periodically adjusted by governments within certain limits.
Fifth: The fundamental reorganization of the debt of countries and firms and, when necessary for their continued productive existence, the cancellation of debt.
Sixth: The setting up in each country of a National Bank in the tradition of Alexander Hamilton, so that credit creation is put under the control of sovereign governments. With this, productive full employment can be achieved through investments in basic infrastructure and innovation.
Seventh: The negotiation among National Banks of long-term agreements on long-term, low-interest credit to allow investments in an international infrastructure program, and projects of the World Land-Bridge such as are outlined in the report “The New Silk Road Becomes the World Land-Bridge,” and as China is implementing in the Belt and Road Initiative.
Eighth: The expansion of the World Land-Bridge, which creates common economic advantages for all countries, which in turn becomes the basis for a new international security architecture, taking into account the security interests of all nations on this Earth.”

The best way to commemorate the 1776 Declaration of Independence is to declare independence from today’s Malthusian nightmare of Anglosphere geopolitics and war. To do that, “a decent respect for the opinions of mankind requires” that an economic alternative must be stated and provided. Join us on July 3 as we pledge our lives, our fortunes, and our sacred honor to the accomplishment of this task. All are invited, and all are urged to participate.