Who Is Behind the Sabotage of the Nord Stream Pipelines? 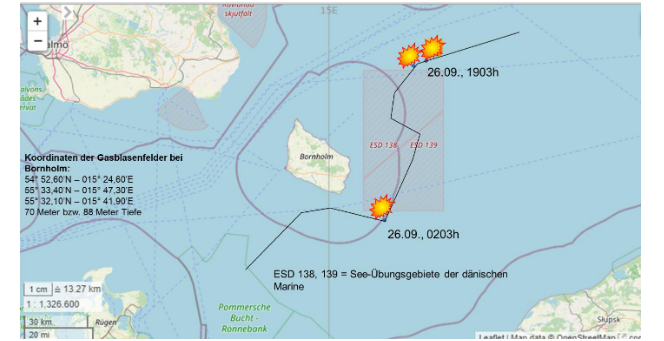 Who Is Behind the Sabotage of the Nord Stream Pipelines?

October 2, 2022by David Dobrodt in General

This article was written by Mrs. Zepp-LaRouche for the German weekly Neue Solidarität and translated into English for EIR. She is the founder of the international Schiller Institute and the Federal Chair of the BüSo political party in Germany

Oct. 1—The sabotage and possible long-term destruction of the Nord Stream 1 and Nord Stream 2 gas pipelines is an attack on Germany’s existential interests, and means millions of German citizens and many firms will suffer insolvencies and unaffordable heating costs for the coming Winter. It also undermines the demands at recent protest actions in many German cities, of demonstrators who called for an end to the sanctions against Russia and the opening of both pipelines, in order to resolve the two most dramatic threats now confronting Germany: the acute danger of a world war stemming from the confrontation with Russia; and the danger of the total economic collapse, due in large part to the explosion of energy prices.

If there was ever a situation in which the government needed to fulfill its oath to protect the German people from harm, this act of terrorism requires intransigent clarification and consequences for those responsible. The implication of the answer to the question of who perpetrated it, is enormous, and is likely identical to the question of war and peace.

Beyond all speculation as to who those responsible might be, the issue is comparable to the circumstances surrounding the attack of Sept. 11, 2001. Just as U.S. air space was completely surveilled by the North American Aerospace Defense Command (NORAD), the Baltic Sea is among the most tightly monitored zones in the world, and, since the time of the Cold War, has been controlled by NATO, and of course by the neighboring countries (Denmark, Sweden, Finland and Germany) with a dense network of sonar and underwater microphones to monitor all movement on sea and in the air.

As in all criminal acts, the questions to be asked are: Who had the means, who had the technical and personnel capabilities to carry out the act, and who was physically present on site in the relevant period of time? The need to fulfill these three criteria limits the list of possible perpetrators to a very short one. And given the tremendous technical requirements for damaging concrete pipelines lying on the sea floor at depths of 70–88 meters, it is generally agreed that such capacities are only at the disposal of countries—and of them, only three: Russia, the United States and the United Kingdom.

An extraordinarily useful assessment of the sabotage of the Nord Stream pipelines has been published by Swiss Lt. Col. (ret.) Ralph Bosshard, who took part in the OSCE’s Special Monitoring Mission in 2014 in Ukraine as senior planning officer, and was later in the OSCE High-Level Planning Group as operations officer. He describes the considerable technical challenges that must be overcome in such a sabotage act, which quite clearly limit the possible culprits to military special forces. And that increases the chances that conclusive information on the attack will come to light.

The robust construction of the pipelines, which are made of special steel and enveloped with concrete, then buried under rubble and covered with other material, requires complex techniques and the use of highly explosive charges at 80 meters under the sea.

Bosshard points out that if the Russian Navy were the perpetrator, it would not have had to take the trouble of destroying the pipelines off the Danish island of Bornholm in the middle of an area closely monitored by NATO, but could have carried it off more easily in the Gulf of Finland. That is, unless the intention was to demonstrate to NATO the superiority of Russian capabilities in seabed warfare, which is an unlikely explanation that Bosshard also references.

So if the Russians can be more or less ruled out as the culprit—after all, they could have simply turned off the tap if Moscow’s aim was to “foment uncertainty” and drive-up gas prices as some media moot—what other options remain?

On the Nachdenkseiten website, Jens Berger notes that the annual NATO maneuver BALTOPS took place in the Baltic Sea in mid-June, with 47 warships under the command of the U.S. 6th Fleet, including the U.S. task force around the helicopter carrier USS Kearsarge. Part of this maneuver was an operation by Task Force 68, which was operating off the island of Bornholm with unmanned underwater vehicles that can deactivate mines but, of course, theoretically place them as well.

Strangely enough, this very same task force around the USS Kearsarge was recorded by position signals last week only 10 nautical miles away from Bornholm. This does not yet mean, of course, that these ships were involved, but that they may very well have been.

Russian Ambassador to the UN Vassily Nebenzia added further observations on this at a UN Security Council meeting convened at short notice on Friday. He noted that the USS Kearsarge had remained in the vicinity of Bornholm since June; that the ship’s helicopter squad had been patrolling the Bornholm area since early August; and that the flight line of these aircraft surprisingly coincided with the pipeline route. Ambassador Nebenzia stressed, “I emphasize that this is open data on geolocation of sea and air transport, which is collected on the basis of the transponder’s signal. It means that the United States did not conceal its presence in the area and completed its maneuvers in an exhibitory and ostentatious way.”

Is it likely that Russia destroyed the pipelines, in which €20 billion in total had been invested, and from which it could have expected considerable revenue over the long-term? Vladimir Putin had offered as recently as the Shanghai Cooperation Organization (SCO) summit in Samarkand, two weeks before the sabotage, to open Nord Stream 2, delivering 55 billion cubic meters of natural gas per year, if Germany agreed to lift sanctions against Russia.

In the meantime, a video has gone viral on the Internet showing President Biden at a joint press conference with German Chancellor Scholz at the White House on Feb. 7, 2022, where Biden promised that the United States was in a position to put an end to Nord Stream 2, in the event Russia invaded Ukraine. Responding to a reporter who asked how he intended to do it, since Germany was in control of the project, Biden answered: “I promise you: We will be able to do it.”

Biden was not the only one to issue such threats: Tucker Carlson showed a video on FOX TV of [Under-Secretary of State for Political Affairs] Victoria Nuland announcing the same thing at a State Department press conference back in January, in the event of a Russian invasion: “One way or another, Nord Stream 2 won’t move forward.” After the attack on the pipelines, former Polish Foreign Minister Radoslaw Sikorski—husband of the bellicose Atlanticist Anne Applebaum—rejoiced, referring in a tweet to Biden’s Feb. 7 promise. “A small thing, but so much joy,” Sikorski wrote. And in another tweet: “Thank you USA.” That tweet has since been deleted.

Obviously, the facts given here are only leads, and not yet proof of the perpetrators’ identities. But the implications of the attack on the Nord Stream pipelines are enormous. They massively increase the immediate prospect of Europe’s deindustrialization, and its dependence on U.S. liquified natural gas (LNG). The skyrocketing costs are already causing a massive exodus of companies from Europe, and especially from Germany to the United States. All this means an assault on the living standards of the population.

The fact that the pipelines have suffered considerable damage, and that repairs, according to the operators, would not be impossible but would take a very long time, has for now taken the wind out of the sails of the German protesters who were demanding the opening of the pipelines and the end of the sanctions against Russia. The pipelines will be inoperable this Winter and beyond, and a possible path to a diplomatic solution with Russia, given the growing threat of war, has been buried.

However, if it is established that the attack was actually the execution of what Biden had announced Feb. 7 in the presence of Scholz, then Europe will have to immediately free itself from subjugation to the United States and the U.K. and mobilize all its efforts to overcoming the conflict with Russia, and increasingly with China, by diplomatic means.

In any event, U.S. responsibility would not be entirely new. On Feb. 27, 2004, the Washington Post reported that Ronald Reagan had agreed to a CIA plan [in January 1982] to sabotage the Soviet economy by covertly feeding it, among other things, contaminated software that later caused a gigantic explosion of the Siberian gas pipeline in January 2004. This revelation was taken from the memoirs of former Air Force Secretary Thomas C. Reed, who reported that this explosion was just one example of the “cold-blooded economic warfare” that the CIA waged against the Soviet Union in the final years of the Cold War. It was economic bankruptcy that led to the end of the Cold War, not battles or an exchange of nuclear strikes, Reed said.

We will have to make sure that the German politicians who want to “ruin Russia” do not willingly put themselves at the service of the perpetrators in covering up the crime. For that, the “harshest consequences” announced by Ursula von der Leyen [President of the European Commission], will have to be implemented, if the Germans do not want to give up altogether. It must be ensured in any case that Russia is included in the investigations. The fact that Scholz has promised support to Denmark and Sweden is definitely too little. Likewise, that Germany intends to strengthen precautions and protection against sabotage for critical infrastructure together with its partners and allies, as government spokesman Steffen Hebestreit said, sounds more like a declaration of surrender than an announcement of the government’s intention to stand up for the existential interests of the German people, as it swore to do in its oath of office.

It is high time to remind them of that commitment.