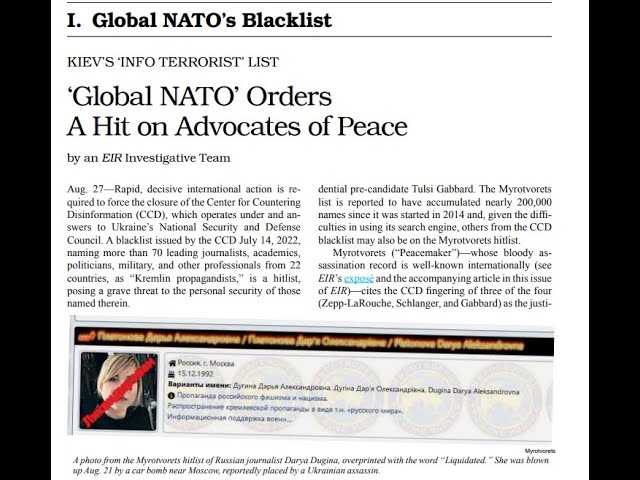 September 7, 2022by David Dobrodt in General

Scott Ritter, Ray McGovern, Col. Richard Black (ret.), Diane Sare, candidate for U.S. Senate, and other Americans targeted by Ukraine’s Center for Countering Disinformation (CCD), who have also demanded Congressional action to stop the U.S. funding of the CCD, will be available to speak to the media. Simultaneous interpretation will be available for several languages (for more information concerning interpretation, contact us by email).

The EIR report states that, “Rapid, decisive international action is required to force the closure of the Center for Countering Disinformation (CCD), which operates under and answers to Ukraine’s National Security and Defense Council. A blacklist issued by the CCD July 14, 2022, naming more than 70 leading journalists, academics, politicians, military, and other professionals from 22 countries, as ‘Kremlin propagandists,’ is a hitlist, posing a grave threat to the personal security of those named therein.”

And that EIR report further states that it has now confirmed that at least five of those fingered by the CCD are included in the list of “criminals to be eliminated” published by the avowedly fascist “Myrotvorets” gang in Ukraine: Schiller Institute founder and leader Helga Zepp-LaRouche; Schiller Institute spokesman Harley Schlanger; former CIA officer and active anti-war activist Ray McGovern, the co-founder of Veteran Intelligence Professionals for Sanity (VIPS), who has participated in Schiller Institute conferences; former UN weapons inspector Scott Ritter; and former U.S. Congresswoman and Democratic presidential pre-candidate Tulsi Gabbard. The Myrotvorets list is reported to have accumulated nearly 200,000 names since it was started in 2014 and, given the difficulties in using its search engine, others from the CCD blacklist may also be on the Myrotvorets hitlist.

The report documents that, “Although the CCD operates under the Office of the Presidency, it is not Ukraine’s “Ministry of Truth”; it is, rather, Global NATO’s. It is funded and closely advised by the U.S. State Department, British intelligence, and NATO in every step it takes.”

Responsibility for the CCD/Myrotvorets hits, both those which have occurred and those threatened, will rest squarely on those international sponsors—including members of the U.S. Congress who vote in support of continued funding for the CCD operation.