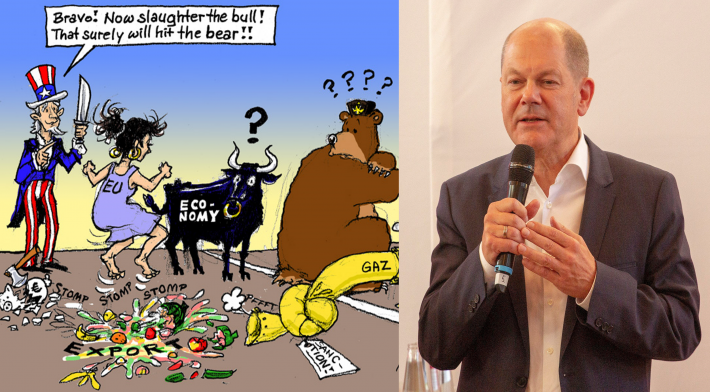 Aug. 15, 2022 (EIRNS)–Germany’s MDR (Mitteldeutscher Rundfunk) TV/Radio station reports that an “incendiary letter to Chancellor Scholz” has been issued in which predominantly eastern German medium-sized companies call for a rethink on the Russia sanctions. They see the economy is at great risk.

“Mr. Scholz, stop and make a policy that we can live with and not sink.” With this urgent appeal, medium-sized companies belonging to the Zentralkonsum eG association call on the German government to “readjust the embargo policy against Russia.” The association is the umbrella organization of the East German consumer cooperatives, whose member companies employ nearly 6,300 people, according to their own figures.

In an interview with MDR, Martin Bergner, spokesman for the association’s board stated: “Stopping all gas deliveries and putting the German economy in front of price increases at which no one can produce at a profit anymore, that won’t work.”  Sufficient gas must be imported to keep the economy running, he said. He added, existing nuclear and coal-fired power plants must also guarantee security of supply.

A bakery chain, Landbäckerei Stendal, reports that they have already been told that they would have to pay four times as much for electricity and six times as much for gas. Added to this would be the increase in the minimum wage from October, and the gas levy, i.e. the additional costs that every consumer would have to pay if, instead of cheap Russian gas, a more expensive one had to be purchased, for example from the U.S.A.

The increased costs have to be added to the products, which in turn fuels inflation, whether in retail, hotels, restaurants, or industry. This is by no means about diminished profits, he says: “We are really in the red,” says Andreas Bosse, the managing director of Landbäckerei Stendal, and expects his family business to lose as much as 300,000 euros already this year.

“It undermines the existence of the companies with damage that cannot be made good,” write the authors of the appeal to Scholz: “The government wants to promote regional products and organic products. But exactly these products are the first thing buyers do without in order to save money,” adds Martin Bergner. He adds that the Chancellor himself once was active at the Central Association of German Consumer Cooperatives. He should therefore know exactly what the situation is like for cooperatively organized businesses. The signatories of the open letter, which charge the government with “being ideologically stuck,” also include prominent restaurants like Berghotel Oberhof and Dorotheenhof Weimar.