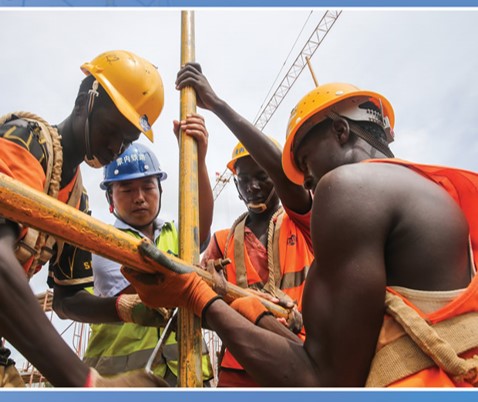 Aug. 6, 2022 (EIRNS)–The folks at London’s fanatically Malthusian the Guardian are besides themselves, having been leaked a document revealing that African nations are discussing going into next November’s COP27 UN climate summit with a common position asserting their right to develop their fossil fuel resources, in order to develop.

In an Aug. 1 “exclusive,” the Guardian reports that someone passed them a five-page “technical document” with an accompanying 25-page explanation revealing the plan, which was prepared by the African Union for a June 14-16 meeting of AU energy ministers. That document asserts that “in the short to medium term, fossil fuels, especially natural gas, will have to play a crucial role in expanding modern energy access in addition to accelerating the uptake of renewables.”

The Guardian warned that if Africa dares to proceed on “new exploration for gas, and the exploitation of Africa’s vast reserves of oil,” the entire climate scheme might collapse.

Africa must not advance past unreliable “sun and wind,” the head of the green “Power Shift Africa” thinktank, Mohamad Adow insists! Africa Coal Network coordinator Lorraine Chiponda denounced African leaders discussing such an idea as “reckless,” even as she admitted that 600 million people in Africa “live in energy poverty.” That is, they have no access to electricity.

The British Royal Family is on the case. On July 6, a fellow at Chatham House/Royal Institute of International Relations issued a so-called “expert opinion,” warning that this year’s UN COP27 summit being hosted by Egypt, an African nation, is a problem. Egypt has not set any quantifiable emission reduction targets, has no economy-wide carbon reduction target, and never published a long-term strategy for decarbonization. It is also the second-largest producer of natural gas in Africa, and is becoming a fossil gas hub for the Eastern Mediterranean, it notes. Furthermore, Egypt has “voiced support for other African countries to extract and deploy fossil gas and oil resources, making it one of the protagonists of the ‘great fossil gas pushback’. These advocates defend the right of developing countries to deploy fossil gas as a ‘transition fuel’ and champion its necessity to solve energy poverty,” the author complained.

With typical imperial arrogance, however, the author assures that Egypt will be “malleable,” if attention is paid to change its stance.