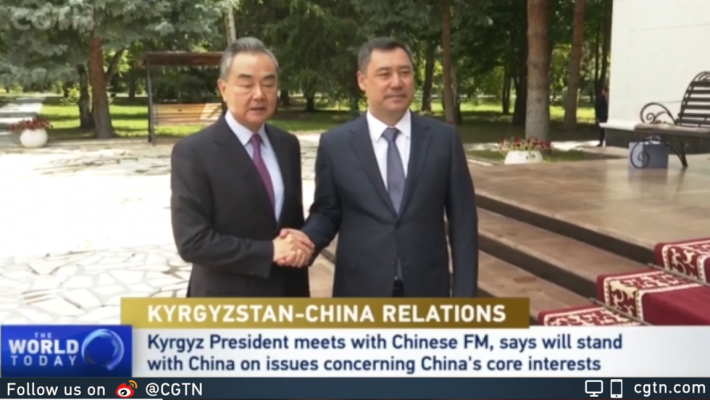 Aug. 1 (EIRNS)—Chinese Foreign Minister Wang Yi continued on his Central Asian diplomatic tour, which brought him to high level meetings in Uzbekistan July 28-29, including the SCO Foreign Ministers’ meeting, and then to Kyrgyzstan on July 30, and Tajikistan July 31-Aug. 1, all focused on the growth of both the nations, and Central Asia as a whole.

In Kyrgyzstan, Wang met with Foreign Minister Jeenbek Kulubaev in the town of Cholpon-Ata. The Chinese Foreign Ministry readout reported that Wang said “the Chinese side has felt the great importance and ardent expectations by Kyrgyzstan and Uzbekistan to the China-Kyrgyzstan-Uzbekistan [CKU] railway project, and will jointly advance this important project at a faster pace…. The Chinese side is ready to import more green and quality livestock products from Kyrgyzstan.” Wang said that China and Kyrgyzstan are ready to increase the frequency of direct flights. Kulubaev said he looks forward to accelerating the CKU railway and welcomed Chinese experts’ arrival in Kyrgyzstan to “carry out the survey work.” His country is “ready to work with China to speed up the implementation of key projects such as the new North-South Highway” and the renovation of the municipal roads of Bishkek, the nation’s capital.

Kulubaev attached special importance to China’s pledge to construct in his nation the Luban Workshop, a program China has developed in several nations, in which Chinese engineers and professionals educate host country’s students and labor force in such subjects as industrial robots, cloud computing, high-speed train maintenance, and vocational training.

On July 31, Wang set foot in Dushanbe, Tajikistan, where he met with President Emomali Rahmon, who noted on his website that China is one of the major trading partners of Tajikistan and its largest investor. Bilateral trade between Tajikistan and China during the first six months of 2022 increased by 82%, compared to the same period last year, and accounted for one-fifth of Tajikistan’s foreign trade.

Some of the groundwork for this trip was worked out at the third China + Central Asia Foreign Ministers’ meeting in Nur-Sultan, Kazakhstan on June 12. The C-5 include Kazakhstan, Kyrgyzstan, Tajikistan, Turkmenistan, and Uzbekistan; at the ministerial, Wang outlined a 10-point program, stemming from the Belt and Road, for the region’s development. It is significant that for the Eurasian Economic Union (EAEU), which Russia helped to found in 2014, both Kazakhstan and Kyrgyzstan are full-time members, and Uzbekistan is an observer.

It is not accidental that both the China and Russian headed organizations seek the agricultural and industrial development of landlocked Central Asia, including Afghanistan, over the Anglo-American looting eyes.