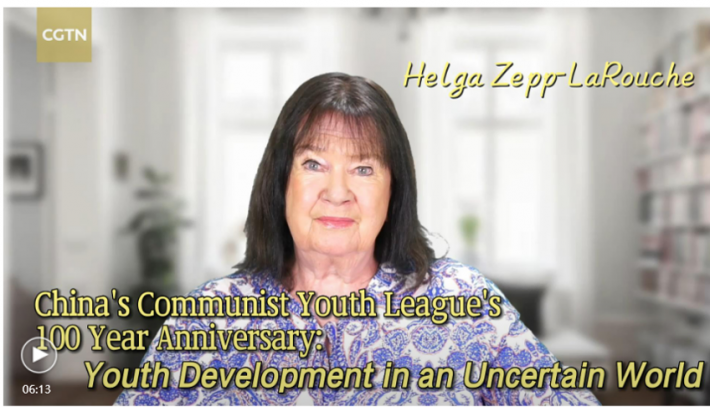 May 17, 2022 (EIRNS)–CGTN on March 17 ran an interview with Helga Zepp-LaRouche, whose write-up on CGTN is titled, “Communist Youth League of China Centenary: Youth Development in an Uncertain World,” and the video link is prominently included.

Author He Yuhan, opens his coverage of Zepp-LaRouche with a quotation from President Xi Jinping, from his May 10 remarks at the 100th anniversary celebration of the founding of the Communist Youth League of China. He then reports, “Schiller Institute founder echoed Zi’s words, and fully endorsed the essential value of youth in a modern country’s development and tackling global challenges.”

Yuhan stated about Zepp-LaRouche’s key points, “She identified two elements as crucial to the vigor of Chinese youth today: a thriving and developing economy and a favorable environment in which the younger generation grew up.”

The Schiller Institute founder also made a comparison for the audience of a difference between German and Chinese attitudes towards children. “Germany’s Green Ideology regards children as a burden to the Earth, but the Chinese see children as full of potential and possibilities,” she said.

Zepp-LaRouche asserted that youth faced with an escalating Russia-Ukraine conflict, the lingering COVID-19 pandemic, and rising global inflation, have the potential to put aside ideological differences and meet the challenges to make a better world. She told the audience, “If young people unite together, I think it’s a peaceful force we absolutely cannot ignore.” {The full article and interview are found here.}