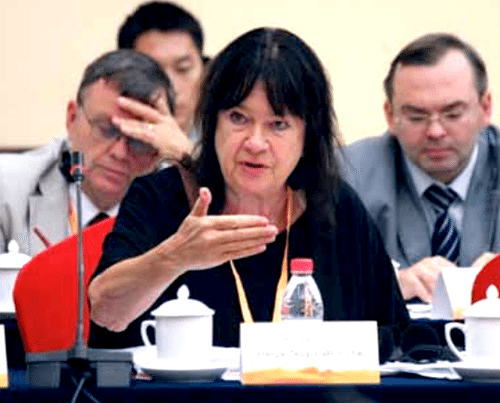 Helga Zepp-LaRouche, founder and president of the Schiller Institute, was interviewed on April 27 about the German government’s decision to supply heavy weapons to Ukraine.

CHINA RADIO INTERNATIONAL: You’re listening to World Today…. Germany has for the first time announced the plans to deliver heavy weapons to Ukraine. German Defense Minister Christine Lambrecht says the government has approved the delivery of Gepard tanks equipped with anti-aircraft guns. The decision comes as U.S. Defense Secretary Lloyd Austin held talks with dozens of NATO member country counterparts over the Ukraine war at an American air base in western Germany on Tuesday.

Joining us now on the line is Helga Zepp-LaRouche, founder of the Schiller Institute, a Germany-based think tank. Hello, good afternoon. Thank you very much for joining us.

CRI: German Chancellor Olaf Scholz has actually for weeks been resisting calls for Germany to deliver heavy weapons to Ukraine. He has been suggesting that such a particular move might trigger a direct military confrontation between NATO and Russia. So, with that in mind, how would you look at Germany’s latest decision?

ZEPP-LAROUCHE: I think it is a complete catastrophe. This government endangers the life and security of the German population. They have made an oath, the German Chancellor and others, that they would protect the interests of the German people and protect them against harm, and this is a complete violation of that oath. It is quite telling that this occurred on the very day that Austin had this meeting in Ramstein [Air Base]—I mean, this was a complete violation of German sovereignty. He’s holding court, and this decision by the German government will only prolong the suffering of the Ukrainian people. They’re cannon fodder in a proxy war between NATO and the U.S. and Russia; and obviously, the attitude on the side of these people is to fight this to the last Ukrainian.

It’s a complete catastrophe, because when Foreign Minister Lavrov said this could lead to World War III and a nuclear war, this is being ridiculed by the German media in cartoons, as if it would be just scare-mongering. I think we are in a very, very dangerous situation.

CRI: Hmm, indeed. As we heard from Lavrov, the Russian Foreign Minister, the threat of nuclear war really should not be underestimated. But we understand that for decades, Berlin has actually been maintaining a policy of not exporting weapons to any particular conflict areas. So help us understand, what’s the rationale behind that policy? And now what’s the war going on in Ukraine: Do you think it is fair to say that Germany has abandoned that particular policy?

ZEPP-LAROUCHE: Well, this thing makes very obvious that Germany is an occupied country, that it’s not sovereign, and what you have seen in the last days in media and in the parties, is that in all of these institutions you have Atlanticists who have been making a drumbeat, saying, “Oh, Germany is not a reliable ally.” But in reality, this delivery of heavy weapons makes Germany a party in the war, and therefore a target if this thing continues to escalate.

Part of the problem is also the EU, because Josep Borrell, who’s the so-called “foreign minister” said this situation will be “decided on the battlefield.” He has never mentioned the idea of diplomacy or that there should be negotiations. And it’s completely insane to try to settle conflicts in the 21st century with war! It’s madness! I can only say, it’s complete madness.

CRI: So, critics, including some officials in Ukraine, have accused Berlin of dragging their heels on giving heavy weapons to Ukraine, and on some of the other possible measures, like a possible embargo of Russia energy imports. Do you think those criticisms that I mentioned are fair to Germany?

ZEPP-LAROUCHE: Well, the reality is, George Friedman, who is a strategic analyst in the United States, he already said in 2015 in a speech in Chicago that the German-Russian relation is the only threat to the United States, because the combination of German technology and capital, and Russian raw materials and labor, would be the only counterweight to the United States. Now, one result of it is that this relationship between Germany and Russia, as of now, has been completely ruined, and this, in light of German history. One should not forget, Russia lost 27 million people in World War II.

The idea to have an embargo against Russian oil and gas, is more insanity, because there are many leaders of the industry who have said this would mean millions of unemployed, entire sectors of industry would collapse; so it’s really an aggression against German interests if such demands are made.

CRI: So, realistically speaking, is Germany capable of sustaining its supply of heavy weaponry to Ukraine, if we talk about a scenario where this conflict between Russia and Ukraine becomes a protracted war?

ZEPP-LAROUCHE: Well, it’s obvious that Germany has a significant arms industry, and they would naturally be happy, like the military-industrial complex in the United States, to deliver these weapons. But the effect on the rest of the economy—you know, you already have massive inflation in food prices, energy prices; if this continues you will have social chaos. The poorer parts of the population already can’t make it to the end of the month. And it’s a complete outrage that there are billions and billions being expended for weapons, when you have a world famine of 1.7 billion people facing starvation. I’m really upset, and I hope you can hear it, because this should not happen! This is really something which needs to be reversed.

The people who are responsible for this, they can commit suicide if they want, but they have no right to completely drive Germany into a catastrophe.

CRI: By the way, do you think President Putin has a point when he said, recently, in a meeting with UN chief António Guterres, that this increasing Western delivery or Western supply of heavy weapons to the battlefields in Ukraine are making Kyiv, making Ukraine a sort of unreliable partner on the negotiation table? Do you think he has a point in saying that?

ZEPP-LAROUCHE: Well, I think the reality is that Zelenskyy is a complete puppet. He’s an actor, and he plays the script which is being written by British public relations firms who basically tell him what to do, as is the United States. The reality is, if you look at the statements by Biden, Boris Johnson, Stoltenberg, they have no mentioned once, the word “peace negotiations.” They only say, “more weapons, more weapons.” So I think it’s not Zelenskyy, it’s the U.S., NATO and the British.

CRI: Well, I guess from Washington’s perspective, they might argue, “OK, we are returning our diplomats back to Kyiv, we have nominated a new ambassador as the U.S. ambassador to Kyiv”: That is a signal that Americans pay attention, attack greater importance to diplomacy.

ZEPP-LAROUCHE: Well, I wish your words would be right, because I think any reasonable person in the world must agree that we have to have to have an end to this war immediately. The Ukrainian people are being slaughtered, and I think what should be discussed instead, is President Xi Jinping at the Boao Forum made a very important proposal to have a Global Security Initiative. And I think the problems of the world are so big, that you need such a global approach, and in that context, the Ukraine situation can be settled also. Because it’s much more complicated. It has very little to do with Ukraine. The Ukrainians are the cannon fodder in a geostrategic confrontation from the United States against Russia—and China, by the way.

CRI: So we understand Russia has suspended, or is suspending natural gas deliveries to Poland and Bulgaria, after these two particular countries refused to pay for the energy supplies in Russian rubles. Do you expect Moscow to take this kind of action against more European Union countries?

ZEPP-LAROUCHE: Well, we should remember that the Russian reaction is coming in reaction to the West confiscating $300 billion in Russian assets, after they took $9 billion from the Afghani people. So the dollar system is not regarded as safe any more, and therefore, Russia and many other Asian countries are reorienting and trying to create an alternative financial system based on gold and other commodities. And you have right now, massive agreements between Russia and India, Russia and China, and many others. I think if it would come to such an embargo, or cutoff from oil and gas from the side of Russia, or the other way around, I think Russia in one sense would cope better than Germany! Germany and Europe would go into a real economic crisis. So the people who are pushing Germany and others in this direction are really not acting in the interests of Germany or the European countries.

CRI: Thank you very much for your analysis. That was Helga Zepp-LaRouche, founder of the Schiller Institute, a Germany-based think tank.

Listen to the podcast here.