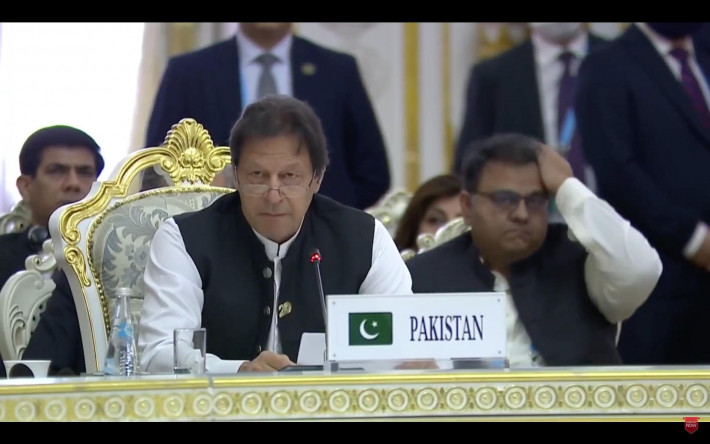 Mar. 7 (EIRNS)–In response to a letter signed by twenty European Union ambassadors in Islamabad last week, demanding Pakistan denounce Russia, Pakistani Prime Minister Imran Kahn retorted: “What do you think of us? Are we your slaves . . . that whatever you say, we will do?” Khan remarked while speaking at a political event.

The EU letter was in response to Pakistan’s abstention from voting on a United Nations General Assembly motion denouncing Russia’s special operation in Ukraine, “I want to ask the European Union ambassadors: Did you write such a letter to India?” Khan said as reported by Sputniknews.com. Khan also reportedly said that Europe has failed to condemn India over Kashmir, where Pakistan and India have fought two wars.

Kahn added that in return for Pakistan’s assistance to the NATO alliance in Afghanistan, instead of thanks, Pakistan had received condemnation.

On Sunday Khan said that Pakistan is “friends with Russia, and we are also friends with America; we are friends with China and with Europe; we are not in any camp.” He went on to say that Pakistan would remain “neutral” and collaborate with those working to end the Ukraine conflict.

Earlier last Friday, a spokesman for Pakistan’s foreign ministry stated at the press briefing that it was “not usual diplomatic practice” for envoys to make public requests like their letter, “and we have made that clear.” He added, “We took note of that and in a subsequent meeting with a group of ambassadors, we expressed our concern about it, because as I said that is not the way diplomacy should be practiced, and I think they have realized it,” he added.

Some European envoys who shared the joint statement on Twitter reportedly erased the tweets some time after.