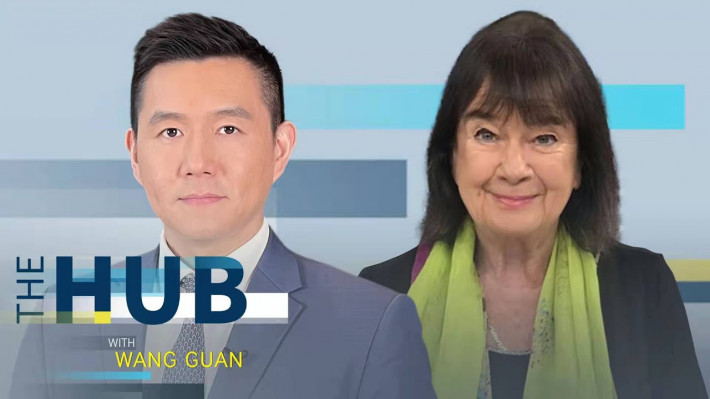 Helga Zepp LaRouche was interviewed on CGTN’s The Hub broadcast this morning by host Wang Guan.

WANG GUAN: And now we’re joined also by Helga Zepp-LaRouche in Wiesbaden, Germany, founder and President of the Schiller Institute. Madame LaRouche welcome back to CGTN. I’m glad to have you with us again. First of all, I want to get your sense of the ongoing Russia-Ukraine conflict: Do you think it could have been avoided?

HELGA ZEPP-LAROUCHE: President Putin had made very clear that red lines had been crossed. He said at one point, there is no place for me to retreat to, and the West did not listen to that. Then, on Dec. 17, he asked from NATO and the United States legally binding security guarantees, that NATO would not expand further to the east, that no offensive weapons would be put on the Russian border, and that Ukraine would never become a member of NATO. And he did not get an answer. He didn’t get an answer to the core question, only to secondary aspects.

So, I think that the West made a big mistake by not listening to legitimate, expressed security concerns of Russia, and now we are on the verge of something which could go completely out of control.

WANG: Madame LaRouche, the U.S. and NATO announced the latest rounds of sanctions against Russia, that target President Putin and Foreign Minister Lavrov and others. Do you think that will deter Russia from its current plans, its operations in Ukraine?

ZEPP-LAROUCHE: I don’t think so, because I think President Putin has discounted this. He has said, some years ago already, that if the West would not have found Ukraine to contain, and to use to dismantle Russia, they would have found another issue. Recently, he said the real aim of all of this is to prevent the economic development of Russia. On Jan. 25 there were two unnamed White House officials who said that the sanctions have the aim to prevent Russia from diversifying from oil and gas, meaning they deny Russia the right to development! [https://www.whitehouse.gov/briefing-room/statements-releases/2022/01/25/background-press-call-by-senior-administration-officials-on-russia-ukraine-economic-deterrence-measures/] This is an act of war. Sanctions are an act of war, and I think that Putin has discounted it. It will be painful for Russia, but I think the West is inflicting much more damage on themselves. And it has to be condemned completely.

ZEPP-LAROUCHE: Well, the UN Security Council has been made practically obsolete by NATO already in 2011, when they lied, in the case of Libya. They got the agreement of Russia and China for a limited action in Libya, which then turned out to be a full-fledged military attack. From that time, the role that lies play has been a big factor, and it does not surprise me at all that now the aim of all of this is to keep the unipolar world. And obviously, Russia and China cannot agree to that, so it’s not a surprise at all.

ZEPP-LAROUCHE: No, I’m calling for an international security architecture, which involves the security interests of all nations on this planet, including Russia and China. I think the historical precedent is the Peace of Westphalia, because, after 150 years of religious warfare in Europe, and the tremendous destruction, all the participating powers came to the conclusion that a continuation of the war would not be to the benefit of anybody, because nobody would live to enjoy it. And we are in a similar situation: If you really look hard at the situation, the danger is the nuclear annihilation of the entire human species. And I think it is that which has to sink into the consciousness of everybody, and then there has to be a process like the Peace of Westphalia, where the principle is that a solution has to take into account the interest of the other, the interest of every other. And that means the security interest of Russia, the security interest of China, of the United States, of the Europeans and all other nations. The second principle of the Peace of Westphalia was that, for the sake of peace, all crimes which were committed by one or the other side have to be forgotten; and thirdly, that the role of the state is important in the economic reconstruction after the war.

Now, the equivalent of that today, means that all powers have to address the real, crucial issue that the reason why we have the conflict in the first place, is the fact that the neoliberal system of the West is collapsing, and therefore, the first act of such a new architecture has to be a global Glass-Steagall banking separation, where the casino economy, which has been the reason why the West is getting so desperate, has to be put to and end. Then, we have to have a national banking system for every single country, and a new credit system in the tradition of the Bretton Woods system, which provides cheap credit for the development of the developing countries. If these measures would be agreed upon, a durable peace would be possible.

WANG: Madame LaRouche, [name 6:23] a renowned political scientist in Asia earlier today said that Russia’s end-game could be to create a “mini-Soviet Union of sorts.” Do you look at it that way, too?

ZEPP-LAROUCHE: No, I don’t think so. I think the only people who are pushing geopolitical blocs right now are those behind President Biden, who tried to create this “alliance of democracies” against the so-called autocratic governments. I think that the agreement between President Xi Jinping and Putin on Feb. 4, where they made a strategic alliance between Russia and China, based on the Five Principles of Peaceful Coexistence, is open to everybody. And I think any new order which is meant to lead to peace must be inclusive, must overcome geopolitics and basically go to a principle where peace is only possible through development, that has to be accessible for all.

WANG: Finally, Madame LaRouche, do you think the U.S. and the West are somehow declining, if you compare their posturing position, in for example, Yugoslavia 20 years ago, when they decisively intervened militarily, and now, with Ukraine, with their equally decisive “no boots on the ground” principle and attitude?

ZEPP-LAROUCHE: Well, we have seen in Afghanistan that NATO and the United States, which are the supposedly most powerful military machine on the planet, were not able to defeat what finally turned out to be 65,000 Taliban fighters. So the military power of the West is in question.

The problem is, that leaves only nuclear weapons, and if you look at the nuclear doctrines—the Prompt Global Strike doctrine, or the recent maneuver Global Lightning, which had this idea of a protracted nuclear war—I think that is the real danger. And therefore, the question of nuclear brinkmanship which we see right now is what has to be avoided and has to be urgently replaced. People have to be aware of the fact that if it comes to the use of one single nuclear weapon, it is the logic of nuclear warfare, as compared to conventional warfare, that all nuclear weapons would be used, and that would mean the complete annihilation of civilization. And that’s what the game is here.

I think the more people understand that, and demand a different world order, a new security architecture, which could be based on the cooperation for a world health system, for example. We still have a pandemic. We have famine, which is called by David Beasley a famine of “biblical dimensions,” threatening the lives of 300 million people who could die. And these things have to be addressed. And that is the only chance for humanity—can we unite all of these… [crosstalk]

WANG: Indeed, a lot of challenges over there. That is all the time we have, I’m afraid—sorry to interrupt. Come back to our show, please, next time. Helga Zepp-LaRouche, founder and President of the Schiller Institute, thank you so much for joining us in this hour.