Another Advance Toward Fusion Power in China’s EAST Tokamak 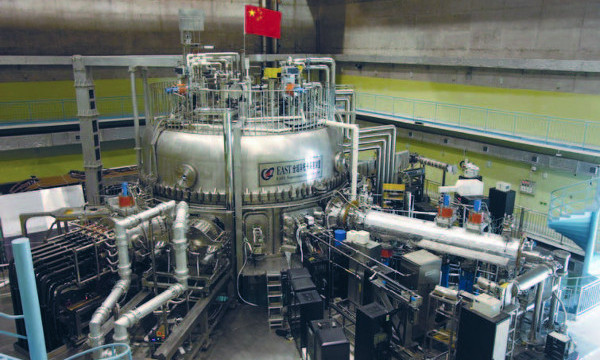 Another Advance Toward Fusion Power in China’s EAST Tokamak

A record combination of high temperature and long duration of confinement of a fusion plasma has been achieved by China’s primary fusion power experiment, known as the experimental advanced superconducting tokamak, or EAST.

{Daily Pakistan} reported on May 29, “China’s artificial sun [has set] a new world record as it achieved a plasma temperature of 120 million degrees Celsius for a period of 101 seconds. The huge accomplishment is a key step toward the test running of a fusion reactor. Announced by Gong Xianzu, who is a researcher at the Institute of Plasma Physics of the Chinese Academy of Sciences (ASIPP), [who] was in charge of the experiment conducted in Hefei, capital of East China’s Anhui Province.”

The EAST experiment took a full year to prepare; and in another run, this Chinese prototype of an “artificial sun,” reached an even higher plasma temperature, 160 million degrees Celsius, and sustained it for 20 seconds. These temperatures are high enough and sustained long enough for deuterium-tritium ions in the plasma to fuse and produce energy, if the superhot plasma can be stably confined with less energy input than the output from the fusion reactions. This requires the third parameter — sustained, much higher plasma density than has thus far been reached in tokamaks.

“It’s a huge achievement in China’s physics and engineering fields,” the paper quoted ASIPP Director Song Yuntao. “The experiment’s success lays the foundation for China to build its own nuclear fusion energy station.”