The World Is Watching The Schiller Institute 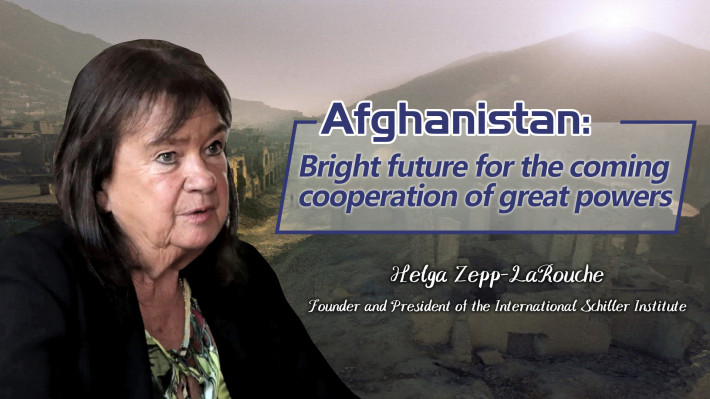 The World Is Watching The Schiller Institute

China’s international news agency, China Global Television Network (CGTN), produced a six minute video of excerpts from the keynote speech by Helga Zepp-LaRouche at the July 31 Schiller Institute Conference, “Afghanistan: A Turning Point in History After the Failed Regime-Change Era.” The CGTN video is titled: “Afghanistan: The Bright Future for the Coming Cooperation of the Great Powers.”

It is certain that leading circles within the U.S., including within the Biden Administration, are watching closely as prominent figures from Russia and China speak at Schiller Institute conferences, and present LaRouche’s ideas in their media and institutional websites.They are watching, and some are listening and learning. Others are chewing the rug, and working with the U.K. to prevent what they see as the greatest danger to their Empire—the United States coming together with Russia and China to address the world’s existential crisis in all its facets—the danger of nuclear war; the pandemic; famine in multiple locations; the cultural decay across the Western world; and the financial bubble threatening to either explode or break out in an even more destructive hyperinflation.

The ending of the 20-year war in Afghanistan, then, is not a disaster, as portrayed in the Western press. It is an opportunity for a great change in the course of human history. Mrs. LaRouche says in the video: “It should be obvious, even to the most incurable warmongers on the planet, that in Afghanistan, no military solution can succeed. In that sense, there must be a recognition that all such endless wars, like in Vietnam, Afghanistan, Iraq, Libya, Syria and so forth, belong to a paradigm of geopolitical thinking that has utterly failed. That means that the geopolitics of the British Empire, of the ‘Great Game,’ of the Arc of Crisis of Bernard Lewis and Zbigniew Brzezinski—must be outlawed forever. And there should be an agreement among all neighbors of Afghanistan that geopolitical manipulation must be ended and replaced by the application of the Five Principles of Peaceful Coexistence.”

Zepp-LaRouche also points to the fact that even Secretary of State Tony Blinken, who generally sounds as mad as Mike Pompeo on all things Chinese, “during his recent trip to India stated that the U.S. government sees a positive role for China in the economic development of Afghanistan.” She pointed to the statement by the Afghan Ambassador to China, “who recently said that Afghanistan is the one place where the United States and China can actually cooperate, since they have common interests such as the suppression of terrorism and the elimination of opium production.”

Zepp-LaRouche concludes: “In this sense, Afghanistan is at a crossroad. Not only for Eurasian integration, but also at a crossroad for universal history where we all can leave the age of immature adolescence behind us, and enter an era of adulthood, in which we concentrate on the common aims of mankind.”

Recall that Biden held a high profile summit with President Putin, and spoke for hours on the phone with President Xi Jinping. Recall also the Deputy Secretary of State Wendy Sherman held extensive discussion with Foreign Minister Wang Yi and the Deputy Minister responsible for U.S.-China Relations, then chaired a major summit with top military and diplomatic leaders from Russia and the U.S. Afghanistan was a leading item on the agenda at both meetings.These leaders are abundantly aware that the ideas expressed by Mrs. Zepp-LaRouche, and the wealth of ideas in the voluminous writings of Lyndon LaRouche which have been translated into Chinese and Russian, are ideas taken extremely seriously in Moscow and Beijing, as they are increasingly around the world.

What direction will the U.S. take at this turning point in human history? The American people are finally beginning to throw off their delusions, their smug confidence that life as usual will go on no matter what they do. As their economy unravels under the Malthusian “Green New Deal”; as the reckless printing of trillions of dollars to bail out the bankrupt financial system without any real economic growth begins to drive inflation to the point of explosion; as their children are being offered legalized drugs and encouraged to change their sex; and as they contemplate the very real threat of nuclear war from the anti-Russian and anti-Chinese hysterics in both political parties—a real resistance is mounting, and is increasingly turning to LaRouche.

Afghanistan is at peace—for now. The Taliban today, unlike the Taliban of the 1990s, is working in close cooperation with Russia, China, Iran, Pakistan and others in the region. Taliban spokesman Suhail Shaheen, in addition to pledging no retaliation and for women to continue working and studying in schools, also told CGTN that “the people of Afghanistan need help of other countries. They should come forward and help in the health sector and also infrastructure and education. They can come to explore our natural resources. This is a general invitation to all countries, and we appreciate any country that they help us at this crucial time of our history.”

Will the U.S. and Europe accept this offer, to work with China’s Belt and Road to build the country they have destroyed, the country President Ashraf Ghani admitted suffered from a 90% poverty rate? Will this approach serve as a model for rebuilding Iraq, Libya, Syria, and Yemen?

Join the Schiller institute on Saturday, Aug. 21 at noon EDT for a follow-up conference to the July 31 event, under the title: “Now More Urgent than Ever: Afghanistan Is an Opportunity for a New Epoch for Mankind“