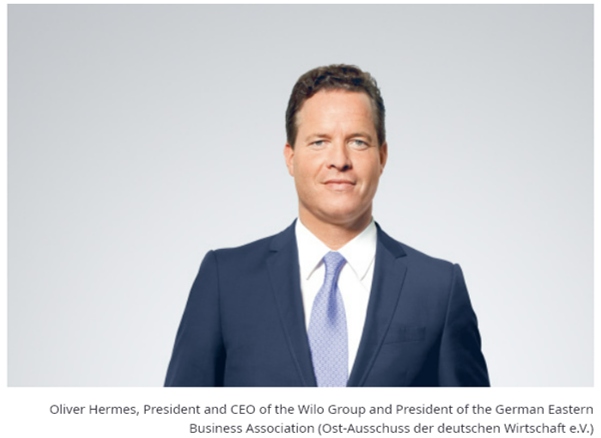 Feb. 2 (EIRNS)–Oliver Hermes, chairman of the Ostausschuss, the German industry’s association for trade with the East, issued an urgent appeal on Feb. 1 to de-escalate the crisis and instead negotiate solutions for the Ukraine problem centered on economic cooperation.

“The specter of war is haunting Europe. In numerous media, but also on the part of politicians, a Russian invasion of Ukraine is literally being conjured up and talked about, as if the `hawks’ on all sides had only been waiting for this opportunity for years… The danger of a massive confrontation between Russia and NATO is undoubtedly greater these days than it has been in 30 years. In addition to the terrible human suffering, a war in Eastern Europe would set back our entire continent and with it the European economy by decades. That is why all sides should try to de-escalate the situation and cool things down. Military muscle-flexing in Eastern Europe is not the way to achieve this.

“The economy can also play its part in de-escalation. Business cannot replace politics, but it can use its specific channels of dialogue. The Committee on Eastern European Economic Relations is celebrating its 70th birthday this year. Beyond our economic function, we have always seen ourselves as `bridge builders,’ contributing to political and social understanding and reconciliation with a region where Germany caused unimaginable harm in the 20th century. The result of our efforts is close economic relations with Ukraine and Russia that have grown over decades. Reliable business partners have become friends in the process. German companies are responsible for around 280,000 employees in Russia alone. Through their work, they lay the foundation for trust and mutual recognition at all levels — from management positions to employees in plants and offices – on a daily basis. This is the long-standing, hard-earned basis for peaceful and successful cooperation in the future. People, not states, build trust.

“Conversely, anyone who questions economic relations with Russia should consider what opportunities for talks and influence Germany still has without economic relations with Russia. Burning these bridges altogether would not make our world any safer. Incidentally, the majority of German citizens would like to see closer cooperation between the EU and Russia: in a representative Forsa survey commissioned by the Committee on Eastern European Economic Relations, two out of three Germans (62 percent) were in favor of more intensive relations between the EU and Russia…

“Foreign trade is only one aspect of our economic relations: Russia is the largest market in our immediate neighborhood and an important investment location. Because of the country’s importance, German companies have already established local and regional value chains to serve customer needs not only in Russia itself, but also in other markets in the Eurasian Economic Union and the rest of Central Asia that can be easily accessed from Russia. And not least because of the German exit from nuclear and coal, dependency on gas supplies from Russia, which is already 40 percent, will even increase in the medium term, Hermes notes.

“The globally-oriented German economy is fundamentally opposed to any form of decoupling. Not only in trade, energy and finance, but also in the security sector, we need European `coupling,’ that is, a pan-European security architecture including Russia and Ukraine…

“We now need a Helsinki 2.0, and jointly overcoming the consequences of Corona through new medicines and medical technology would be an important approach. Initiatives on digitization and on training and education for skilled workers already exist, but they could be more closely networked. The same applies to the agricultural sector — Ukraine and Russia are record wheat producers and rely heavily on German agricultural technology. Above all, however, the topic of energy has linked Germany, Russia and Ukraine for over 50 years. Turning existing energy relations into a trilateral climate partnership is therefore a logical and overdue step. It is time for a conference on security and climate cooperation in Europe – preferably again in Helsinki.”