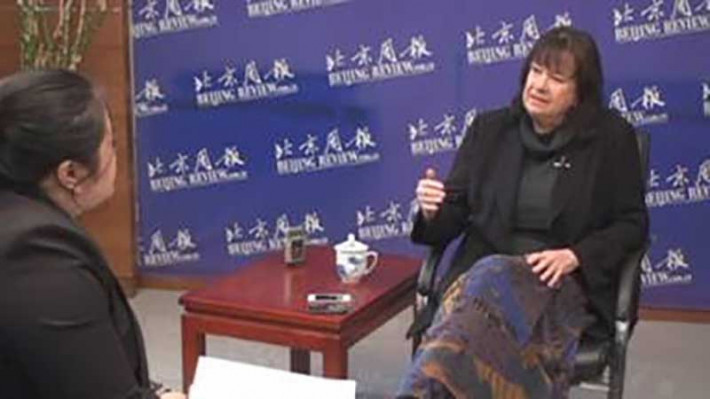 Helga Zepp-LaRouche, President of the Schiller Institute, was a guest on the CGTN podcast, World Today, on Wednesday, January 5, 2022. This segment was transcribed by EIR.

CGTN: A spokesperson of China’s Foreign Ministry said it is right for Lithuania to acknowledge the mistake it has made regarding Taiwan, and China urges Lithuania to take action and return to the One-China policy. Spokesperson Wang Wenbin made the remarks in response to Lithuanian President Gitanas Nausėda’s rebuke against his government’s decision of allowing the opening of a Taiwan representative office in his country. President  Nausėda said on Tuesday that it was a mistake to allow China’s Taiwan region to open a representative office in Vilnius using its own name. He told a local radio station that “the name of the office has become the key factor that now strongly affects our relations with China.”

China had expressed a strong protest over Lithuania’s approval of the establishment of the so-called “Taiwan representative office” in Lithuania and downgraded the diplomatic relations with Lithuania in November.

For more on this, we’re now joined on the line by Helga Zepp-LaRouche, founder of the Schiller Institute, a Germany-based political and economic think tank.

Thank you, Helga, for talking to us again.

CGTN: First off, do the Lithuanian President’s remarks mean a softening of tensions regarding this issue?

ZEPP-LAROUCHE: Well, it’s definitely good that he retracted the approval of the name, but this is not a case of nominalism. The question is not the label, the question is the One-China policy which is internationally recognized since 1971, and the question is, can the United States, the British and other countries that use a little country of 3 million people as a pawn in their geopolitical confrontation, and this is an effort by Secretary of State Blinken to push all of these little countries in an “alliance of democracies” so-called. But I think it’s not good for the people of Lithuania. It’s not in their interest.

CGTN: Right. Well, you pointed out correctly this is not just a matter of the name. Rather it’s the principle of the One-China policy. But how much does the difference between the Lithuanian President’s remarks, and the actions of the Lithuanian government have to do with how the government is run in the country, and the domestic politics in the country? Because remember, I think the prime minister of Lithuania, who has the cabinet, was beaten in the elections in 2019 by the President.

ZEPP-LAROUCHE: Well, according to the Lithuanian media, the support for the government is absolutely dropping. Only 17.3% of the people voted in a poll that they trust the government, while 47.8% say they distrust the government. So you can see, now, the effect of how Lithuania has to be seen in the context of the NATO expansion to encircle Russia. I mean, we should look at the documentation which the Schiller Institute just produced: There are now absolutely authentic documents which prove that Secretary of State [James] Baker, on Feb. 9, 1990 promised that NATO would not move one inch to the East. But as we now know, 14 countries have joined NATO, and now President Putin is demanding the signature under two treaties that this stop, because it impinges on the security interests of Russia. Now, Lithuania is a victim of that NATO expansion to the East, and billions of dollars have been spent to finance NGOs to convince the population of the East European nations that they should adopt Western values, but you see right now a big backlash against it, and this is one of the reasons why the support for the Lithuanian government is dropping so quickly.

CGTN: Going again into the question of Taiwan, how bad an example is Lithuania’s decision to allow the opening of this office? How bad is it, in the sense that it kind of internationalizes the Taiwan question, which should be a domestic issue of China?

ZEPP-LAROUCHE: Naturally, it is bad, because Lithuania, also, as a result of this policy, left the 17+1—these are the countries in Central and Eastern Europe which cooperate with the Belt and Road Initiative—but it’s really not that significant, because there are many countries in Europe which stick to the One-China policy, and which do see it in their self-interest to cooperate with the Belt and Road Initiative. So, it’s bad, but it’s not dramatic.

CGTN: Lithuanian officials once appealed to the European Union for help, regarding their tensions with China. What is the EU’s position on this issue, because we see, recently the Chinese Foreign Minister Wang Yi said in a year end interview with the press that Europe has a “cognitive split” in its policy toward China, by trying to be both a partner and also seeing it as an opponent. Do you agree with Wang Yi? What is the EU’s state, here?

ZEPP-LAROUCHE: I think Wang Yi is a very good diplomat: Because I could easily find much more harsh words for describing a person who has a split mind. So I think he’s very diplomatic.

I mean, the Europeans on one side see—there are many people in Europe who see it as their self-interest to have good relations with China. On the other side, there are also people who are just NATO representatives within the EU so to speak. So I think many do not have the backbone to stand up against U.S. and British pressure, but increasingly, it’s a question of credibility of the West in general. If you look at their policy toward Afghanistan, for example, it’s completely disgusting.

So I think the content of the policies will become increasingly important, and I think Europe will have to make up its mind, to follow its self-interest or not.

CGTN: Indeed, that’s the autonomy that European Union leaders have been talking about for quite a long time. Thank you.

We have been talking to Helga Zepp-LaRouche, founder of the Schiller Institute, a Germany-based political and economic think tank.