China Is Preparing for Manned Missions to the Moon 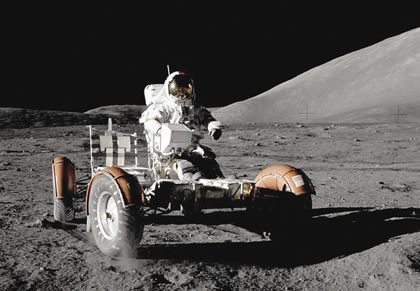 China Is Preparing for Manned Missions to the Moon

Jan. 27 -In 1971, the Apollo 15 crew left a retro-reflector on the Moon. It is a passive instrument, and just reflects laser pulses from Earth back to Earth. The time–very precisely measured–of he return pulse, indicates the distance between Earth and its nearest neighbor. In all, three reflectors were left on the lunar surface during the Apollo missions, and one by the Soviet Lunokhod 2 over. They are still used by scientists for research in astrodynamics, Earth-Moon system dynamics (the Moon is slowly moving away from the Earth), and lunar physics. The technique is called Lunar aser Ranging (LLR), and now Chinese scientists are using the Apollo 15 reflector for LLR experiments, in preparation for their future missions to land astronauts on the Moon.

On Jan. 22, Xinhua reported yesterday, an applied astronomy group at the Yunnan Observatories in Kunming carried out China’s first Lunar Laser Ranging experiment, to obtain precise measurments of he distance between the Earth and the Moon.

While it was an interesting scientific experiment, the technique also has important practical applications. Landing an unmanned vehicle on the Moon requires using detailed orbital photographs to define a safe and interesting general landing region, where the engineers aim the lander. For a robotic spacecraft, the landing ellipse can be a relatively wide area to aim for. But or a manned mission, a more precise targetting is preferable. China can now use the laser ranging technique for its manned lunar program.

Until now, only the U.S., France, and Italy have successfully deployed laser ranging technology. It is reported that on a future mission, China will place its own retro-reflector on the Moon.

Chinese scientists are also studying the human factor itself, and technology to support crew on the Moon. Chinese student volunteers have just completed 200 days in Beihang University’s “Lunar Palace.” The two men and two women are biomedicine students and are the second group to work in the simulated space lab. A main capability needed to live off Earth is regenerative life-support ystems, where waste is recycled, and in the advanced phase, virtaully no materials have to be suppplied from the outside. The “mission” also entailed study of the social interactions and sychological condtion of the crew.

Chief designer Liu Hong said that her team would apply to have a mini-life support system on a lunar or Martian probe, with another system as a ground control. NASA and its partners have used the International Space Station to test closed-cycle life support systems, and the station itself recycles various waste products to reduce the amount of material that has to be delivered from the ground.