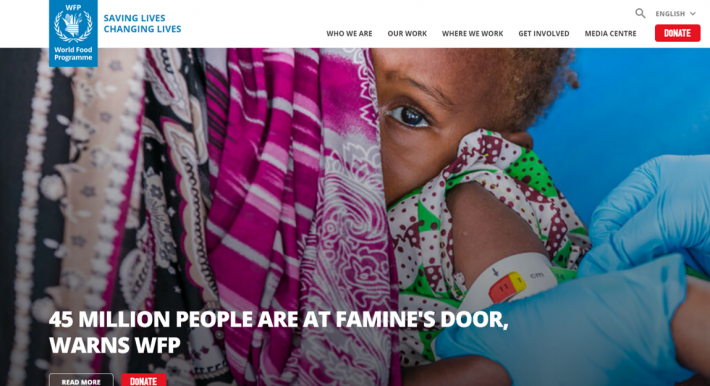 Nov. 8 (EIRNS)–The World Food Program has issued an emergency statement in the last 24 hours, reporting on the rise to 45 million people of those who are on the brink of starvation worldwide. This is an increase of 3 million from only a few weeks ago. The 45 million people are in 43 nations, and the recent increase is from Haiti, Ethiopia, Somalia, Kenya, Burundi and Kenya. Compare this 45 million number to 27 million, who were in this dire condition in 2019, which already was an intolerable number. Then came the pandemic, and now the hyperinflationary breakdown.

The WFP has raised its appeal for funds to cover the crisis up to $7 billion from $6.6. billion…” WFP Executive Director David Beasley explained that, “As the cost of humanitarian assistance rises exponentially, we need more funds to reach families across the globe who have already exhausted their capacity to cope with extreme hunger.”

Beasley stressed in the report, “Fuel costs are up, food prices are soaring, fertilizer is more expensive, and all of this feeds into new crises like the one unfolding now in Afghanistan, as well as long-standing emergencies like Yemen and Syria.”

Beasley was in Afghanistan over the weekend, on a fact-finding mission, where the WFP is ramping up its operations for aid to nearly 23 million people there. He told BBC yesterday, “It is as bad as you possibly can imagine, …In fact, we’re now looking at the worst humanitarian crisis on Earth. Ninety-five percent of the people don’t have enough food, and now we’re looking at 23 million people marching towards starvation,” he added. “The next six months are going to be catastrophic. It is going to be hell on Earth.”

He said, “To the world leaders, to the billionaires: imagine that this was your little girl or your little boy, or your grandchild about to starve to death. You would do everything you possibly could, and when there’s $400 trillion worth of wealth on the earth today, … shame on us that we let a single child die of hunger. Shame on us. I don’t care where that child is.”