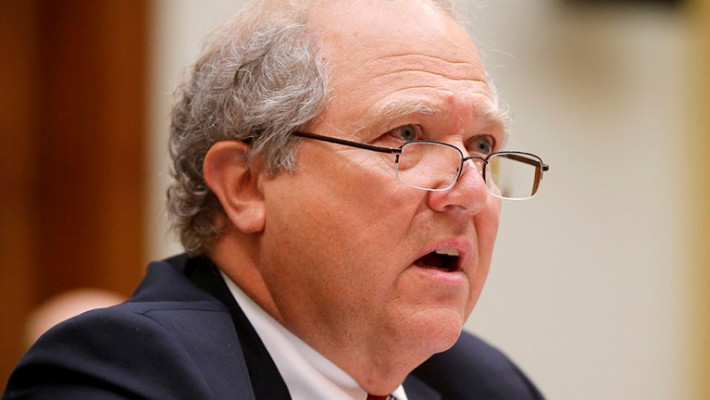 Oct. 30 (EIRNS)–John Sopko, the Special Inspector General For Afghanistan Reconstruction (SIGAR), blasted the State and Defense departments for their lack of cooperation with his office in remarks prepared for the Military Reporters & Editors Association Annual Conference yesterday. “U.S. agencies have not made honest reporting easy for SIGAR” or for the news media in reporting on the war in Afghanistan, he said. Sopko described efforts, some very recent, by the two departments to restrict the information available to the public in SIGAR’s reports, among them the fact that SIGAR has to put some information for its quarterly reports into classified annexes, all of which, he argued, should be declassified.

The State Department claims that its requests to restrict information is to protect Afghans who worked with the U.S. occupation but, Sopko said, “State was never able to describe any specific threats to individuals that were supposedly contained in our reports, nor did State ever explain how removing our reports now could possibly protect anyone since many were years old and already extensively disseminated worldwide.”

Sopko reported that he recently received a letter from the State Department asking that 2,400 items on the SIGAR website, attached to the letter in spreadsheet form, be redacted. “[I]t quickly became clear to us that State had little, if any, criteria for determining whether the information actually endangered anyone – and I think you will agree with me that some of the requests were bizarre to say the least.” Among them was a request that SIGAR redact the name of Ashraf Ghani from its reports. “While I’m sure the former President may wish to be excised from the annals of history, I don’t believe he faces any threats simply from being referenced by SIGAR,” Sopko said. He added that SIGAR’s own risk assessment found all but four of State’s 2,400 redaction requests to be without merit.

Sopko argued that the main reason why few people understand why the U.S./NATO-created Afghan government fell so quickly in August is because of the information that the State and Defense departments have withheld from release. This includes information compiled on the performance of the Afghan security forces since 2015. “This information almost certainly would have benefited Congress and the public in assessing whether progress was being made in Afghanistan and, more importantly, whether we should have ended our efforts there earlier,” Sopko said. “Yet SIGAR was forced to relegate this information into classified appendices, making it much more difficult for Members of Congress to access the information, and completely eliminating public and press access to and discussion of that information.”

The documents now known as the Afghanistan Papers were originally produced in Sopko’s office and they showed, among other things, that the private assessments of U.S. officials often contradicted their public statements on the “progress” the U.S. was making in Afghanistan.

SIGAR also released its latest quarterly report, yesterday, in which it found that more than $100 billion went down the drain when the government collapsed on August 15. The United States provided $89 billion in training and equipping the Afghan National Defense and Security Forces and more than $17 billion “in on-budget assistance” to the Afghan government, according to the report. The net result of all of this expenditure is now zero as the government it was meant to support no longer exists.