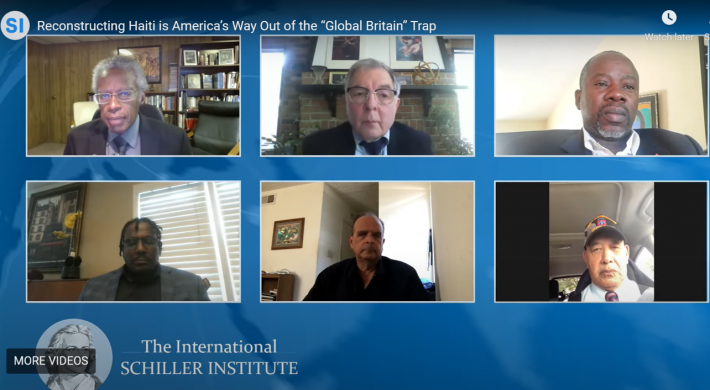 Sept. 25 (EIRNS)—Today the Schiller Institute held an international webinar titled, “Reconstructing Haiti—America’s Way Out of the ‘Global Britain’ Trap.” The two-and-a-half-hour discussion featured elements of a proposed development outline for Haiti, as well as immediate emergency action required, and brought together experts, with ties to Haiti, in engineering, medicine and development policy. Today’s deliberations stand in stark contrast to the events of the week, which included the U.S. forced deportation of thousands of displaced Haitians from the Texas-Mexico border, back to Haiti, to disaster conditions from the August earthquake and before.

The six panelists were Richard Freeman, co-author of “The Schiller Institute Plan To Develop Haiti,” which EIR will publish this week for its Oct. 1 issue; Eric Walcott, Director of Strategic Partnerships, Institute of Caribbean Studies; Firmin Backer, co-founder and President of the Haiti Renewal Alliance; Joel DeJean, engineer and Texas activist with The LaRouche Organization; Dr. Walter Faggett, MD, based in Washington, D.C., where he is former Chief Medical Officer of the District of Columbia, and currently Co-Chairman of the Health Council of D.C.’s Ward 8, and an international leader with the Committee for the Coincidence of Opposites; and moderator Dennis Speed of the Schiller Institute.

Freeman presented both the dimensions of both the extreme underdevelopment forced for decades on Haiti, and also the essentials of a development program for that nation, in the context of development of all the Island of Hispaniola, and the Caribbean. He presented a map of proposed rail, nuclear power sites, safe water systems and other vital infrastructure. He showed maps of proposals that Chinese firms had made in recent years, but which fell into abeyance.

Firmin Backer pointed out that the USAID has spent $5.1 billion in Haiti over the 11 years since the 2010 earthquake, but what is there to show for it? Now, with the latest earthquake on Aug. 14, we can’t even get aid into the stricken zones, because there is no airport nor port in southern Haiti to serve the stricken people. We should reassess how wrongly the U.S. funding was spent. Firmin reported how Haiti was given some debt cancellation by the IMF years back, but then disallowed from seeking foreign credit!

Eric Walcott was adamant, “We need the creative genius of the world to bear on Haiti and Afghanistan.” He said, “leverage the diaspora” to develop Haiti. There are more Haitian medics in New York and Miami than all of Haiti. He stressed that Haiti is not poor; the conditions are what is poor. But the population has pride, talent and resourcefulness. Walcott made a special point about elections in Haiti. He said, “Elections are a process,” not an event. He has experience. From 1998 to 2000, Walcott served as the lead observer for the OAS, for elections in Haiti.

Joel DeJean, an American of Haitian lineage, was forceful about the need to aim for the highest level in that nation, for example, leapfrog from charcoal to nuclear power. He advised, “give China the opportunity” to deploy the very latest nuclear technology in Haiti—the pebble-bed gas cooled modular reactor. We “don’t need more nuclear submarines, we need nuclear technology!” He called for the establishment of a development bank in Haiti, and other specifics.

Dr. Faggett summed up at many points, with the widest viewpoint and encouragement of action. He served in the U.S. military’s “Caribbean Peace-Keeping Force,” and was emphatic about taking action not only in Haiti, but worldwide. He referenced President Franklin Delano Roosevelt, saying that “you can tell a lot about people, by how they take care of the health of their people.” He reported that, at present, aid workers in Haiti, are having to shelter in place, because of the terrible conditions.

But, he said, we should mobilize. Have “vaccine diplomacy,” and work to build a health platform in Haiti, and a health care delivery system the world over. He is “excited about realizing Helga’s mission,” referring to Helga Zepp-LaRouche, Chairwoman of the Schiller Institute, who issued a call in June 2020, for a world health security platform. At that time, she and Dr. Joycelyn Elders, former U.S. Surgeon General, formed the Committee for the Coincidence of Opposites.